To Grow Coral Reefs, Get Them Buzzed 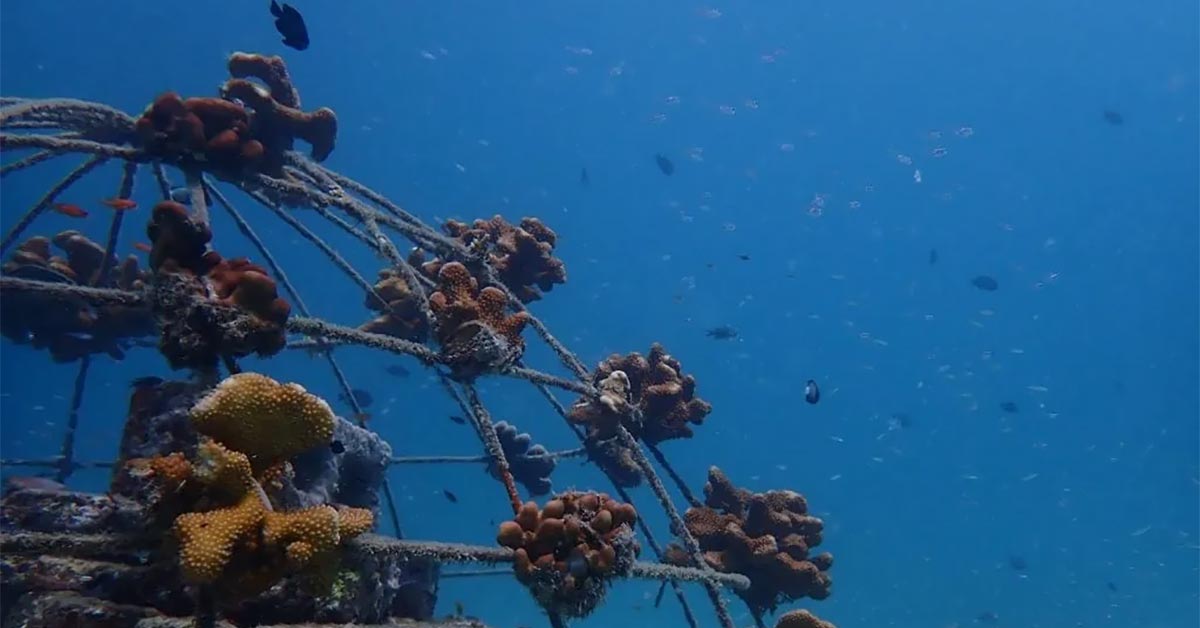 In a small fisherman’s boat, two divers set off in the Andaman Islands in India, pulling away from a pristine beach and a coast fringed by mangroves.

The sea is every shade of blue, but all is not well beneath the surface of this picturesque archipelago. In the last two decades, its coral reefs have suffered several bleaching events, a tsunami and stress from human activity.

Anjili Sarah and Sangamesh Uday, the two divers, plunge beneath the waves, to a section of the vibrant coral reef that drew over half a million tourists to the islands in 2019-20. Sturgeon, parrot fish and stingrays swim around them as they methodically survey every inch of the reef for algal or sponge growth, new marine life and any new damage.

Ninety minutes later, they return to the boat, compare notes and soon, dive again. They do this twice, sometimes three times a week, assessing changes in coral and marine diversity. It is a lot of work for a single reef.

They work for ReefWatch Marine Conservation, an organization that has developed nine artificial reefs near the archipelago’s natural coral formations.

Bobbing on the water’s surface, a buoy with a solar panel, connected to the artificial reef’s metal frame, delivers a continuous electrical current. Like a mad scientist’s creation shocked to life by a lightning bolt, this low-voltage charge accelerates the coral’s natural formation process.

In nature, coral grows at a creeping half-centimeter per year through the accretion of minerals dissolved in seawater, which form a thick layer of substrate.

But on electrically charged reefs, the electric current takes on some of the heavy lifting needed to deposit essential calcium carbonate on the reef.

“We see an immediate uptick in marine life when the artificial reef is set up,” she says. “In time, hopefully it will fuse and bulwark the natural reef.”

The science of solar-charged reefs

In the 1970s, while studying how seashells and reefs grow, Wolf Hilbertz at the University of Texas School of Architecture discovered that when a small electric current is passed between two metal electrodes placed in seawater, dissolved minerals are deposited into a layer of limestone, similar to the substrate that corals need to thrive.

Later experiments found that the coating could thicken at a rate of five centimeters per year — up to ten times faster than coral grows naturally — for as long as a current was flowing through it.

Hilbertz died in 2007, and Biorock’s patent expired in 2008, opening the door for scientists everywhere to use the process.

Goreau went on to run the Global Coral Alliance, which has developed more than 700 Biorock reef projects in more than 45 countries.

The benefits of Biorock structures have been shown to be numerous, causing not only hard coral, but other forms of marine life such as tunicates, bivalves, sponges and soft corals to develop at faster speeds.

But hastening coral growth is not the only benefit of a small shot of electric current. The buzz ensures a continuous deposit of calcium carbonate, which makes these reefs self-repairing. They are also more resilient to tsunamis, cyclones and storms.

Studies (albeit mostly conducted by Goreau and his team at Global Coral Reef Alliance) show that Biorock reefs quickly get tethered to the seabed with the accretion of calcium carbonate, and can consequently weather storms effectively.

These lab results have been proven by real-world events. After Hurricanes Hanna and Ike in September 2008, Biorock coral reefs in Grand Turk were found to have suffered little structural damage and most of the coral on them survived.

Moreover, research indicates that after Biorock reefs were placed around severely eroded beaches on low lying islands in Indonesia, the beaches regenerated in a few months.

Perhaps more significant, at a time when rising ocean temperatures and acidity are threatening coral reefs worldwide, the electric charge in Biorock reefs helps make them more resilient to bleaching events, algal diseases and the increased sedimentation, which reduces the sunlight they receive.

Biorock reefs in Indonesia survived bleaching events in 2016 and 2020, while coral on nearby natural reefs did not.

The folks at ReefWatch, which began using Biorock technology after its patent ran out, similarly observe that with the mineral accretion of the reef taken care of by the electric current, corals growing on it are able to use all their own energy reserves to survive.

“We’ve found that the electric current leaves the coral with an energy budget that helps it survive warmer temperature and coral disease,” Jain says.

Creating reefs where none existed before

Over 2,200 miles away from where Sarah and Uday are conducting their research, in the Gulf of Kutch off the shores of Gujarat, divers rue the poor visibility of the water. Unlike the clear seas around the Andaman Islands, the gulf is a pretty tough place for marine life.

It has a wide temperature range, currents, organic pollutants and high salinity, which means that the 40-odd species of hard coral and 10 species of soft coral here survive against all odds.

In this largely barren seabed, an artificial reef with bright, large coral and batfish flitting in and out of its frame stands out from a distance.

Set up in 2020 by the Zoological Survey of India (ZSI), with support from the Gujarat forest department and the Global Coral Reef Alliance, this project is more ambitious in its scope than ReefWatch’s.

“We wanted to not just restore the degraded reefs of the gulf, but also to bring back the staghorn coral, which had become locally extinct here 10,000 years ago,” says Chowdula Satyanarayana, a scientist with the Survey who is leading the project.

Earlier attempts to repopulate the gulf with staghorn coral had failed. Satyanarayana, who had trained in Indonesia with the Global Coral Reef Alliance, decided on a two-pronged course of action — Biorock technology and a smarter transplantation technique.

“Past attempts to bring back staghorn coral had used specimens from Lakshadweep Islands, which are pristine compared to the gulf. Perhaps when they were transplanted in the turbid waters here, they couldn’t withstand the shock,” he says.

Instead, ZSI transplanted specimens from over 2,000 kilometers away in the Gulf of Mannar, which lies between the southeastern tip of India and the west coast of Sri Lanka. This is, in parts, even more degraded than the waters of Kutch.

The approach worked. Two years later, Satyanarayana says that 65 to 68 percent of the coral has survived the long-distance transplantation. What’s more, the transplanted corals are growing eight to ten times faster — and better — on the Biorock reef.

The artificial reefs have also withstood the water currents and have become “almost cemented to the seabed,” he says, adding that the corals growing on this reef seem more resilient to the effects of sedimentation and lower exposure to the sun, compared with those on the natural reef.

The ReefWatch model differs from the Biorock process in that it does not supply continuous current to the reef — Jain and her colleagues remove the floating solar panels during the monsoon to prevent them from being damaged, and reattach them in September, whereas the solar panels on the Biorock reefs in Kutch work year round.

This has enabled them to observe how the reef behaves when it does not have current running through it.

“We’ve observed that corals grow slower without the current,” Sarah says. “Algal growth increases as well, and last year, when we returned to the reef after the monsoon, we noticed an uptick in coral predators like parrotfish.” Once the reefs are connected again to the solar panel, the conditions swiftly become more conducive to coral growth again.

This is why critics of such intensive coral regeneration projects ask if they are worth the expense and extensive monitoring and maintenance they require. Satyanarayana reckons that the Zoological Survey’s reefs in the Gulf of Kutch cost about $31,400 USD each to construct.

“When compared to the outcome, the fact that we have managed to regenerate coral reefs in a polluted area and have created a repository of rare corals found off the shores of India, the cost is worth it,” he argues.

While ReefWatch’s Jain states that their costs (about $19,000 USD to construct nine reefs) have been much lower, the lean outfit of divers will need to monitor their nine artificial reefs for at least five years.

They are currently working on developing a more resilient solar device which would enable them to provide more continuous current to their reefs.

On World Oceans Day in June 2020, they launched Adopt a Reef, a program that invited individual sponsorships of reefs for $470 USD per year. Within six weeks, all existing reefs were fully funded.

But healthier reefs don’t merely cost money — they generate it, too. Reefwatch’s Jain says that the tourism department of Andaman and Nicobar Islands is interested in developing artificial reefs to attract more tourists to the islands.

Satyanarayana is more ambitious, suggesting that coastal areas could actually create reefs where none existed before, offering not only more habitats for fish, but more dive sites for tourists, too.

“The beauty of this technology is you can have Biorock reefs anywhere along the coast, even in areas without natural coral reefs,” he says, adding that they have been approached by a diving company to develop a dive site with a new coral reef structure off the coast of Chennai.

“Developing new reefs would benefit not just corals but other marine organisms… and it would bring tourism revenues as well.”

Such reefs would also protect the coast and mainland from storm surges, tsunamis and beach erosion.

The planet may have already exceeded the upper temperature limit for coral reef ecosystems to thrive. This is where electrically charged artificial reefs — and the heat resilience they have been shown to develop in the corals growing on them — offer a viable solution.

But without more funding and a global collaborative effort, they risk remaining isolated proofs of concept, not widespread solutions.

Meanwhile, in the turbulent waters of Kutch, ZSI’s divers carefully zip-tie freshly broken coral fragments to the reef. Beyond, in an underwater nursery, new transplants of staghorn coral, and many other coral species, are being nurtured.

Satyanarayana says Biorock reefs and such coral nurseries could ensure the eventual survival of different coral species in the world’s rapidly warming oceans.