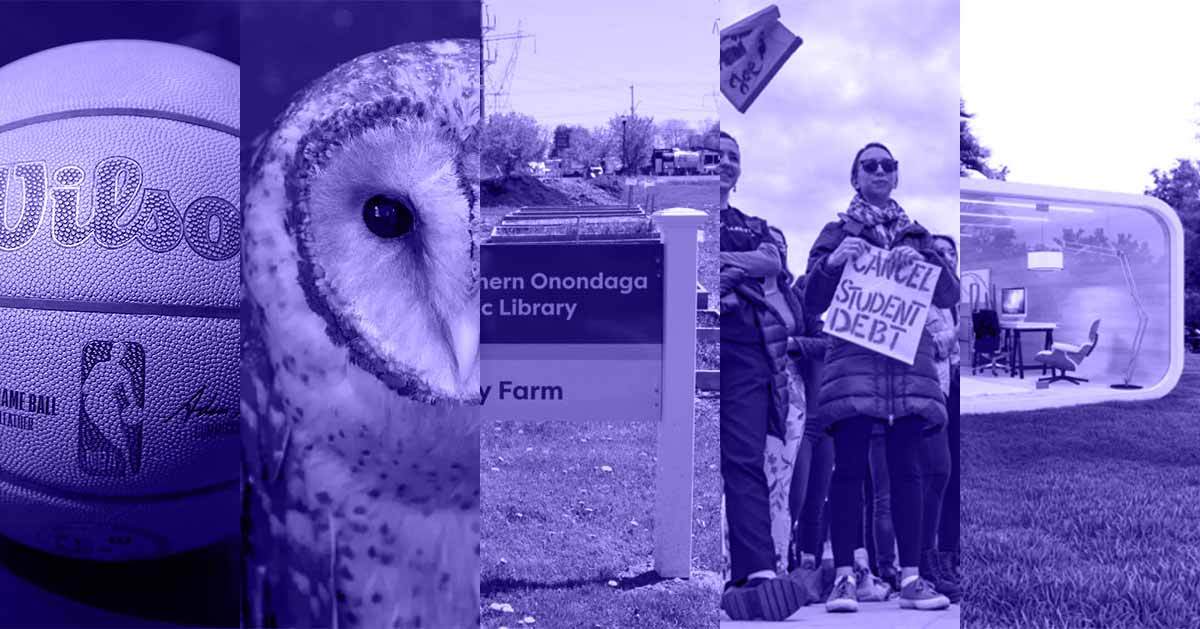 To help encourage fans to vote, the NBA isn’t playing any games on election day this November

The NBA just announced its schedule for the 2022-2023 season — and it intentionally scheduled no games on November 8, midterm election day. All 30 NBA teams will play the day before, and the league hopes they use it to encourage fans to vote and share the importance of civic engagement.

Teams are also being encouraged by the NBA to share election information, like voter registration deadlines, with fans leading up to election day.

“The scheduling decision came out of the NBA family’s focus on promoting nonpartisan civic engagement and encouraging fans to make a plan to vote during midterm elections,” the league said.

The most common cancer impacting women in Rwanda, cervical cancer killed 940 women in the country in 2019. But with rapidly expanding testing, tens of thousands of community health workers helping raise awareness, and a successful HPV vaccination program for 12-year old girls — officials say the country is on track to be the first in Africa, and potentially the world, to eliminate cervical cancer.

Community health workers visit remote villages to let people know about it, and encourage them to attend screenings so they know if they need to receive treatment.

Worldwide, cervical cancer is the fourth most common cancer in women, and about 90% of deaths are in low- and middle-income countries. The news that Rwanda has successfully implemented a screen-and-treat and vaccination program, putting it on the way to leading the world in preventing cervical cancer is incredibly hopeful progress to celebrate.

In part to protect an endangered owl, environmentalists in Australia fought a proposed toxic waste dump at an ancient rainforest — and they won

Environmentalists with the Bob Brown Foundation, a Tasmanian NGO that works to protect ecologically significant places in Australia, took legal action to stop a Chinese mining company from creating a toxic waste dump in one of the country’s rainforests, Tarkine.

They just won, securing protections for both the rainforest and the endangered Tasmanian masked owl that lives there. The federal court found the government didn’t apply the “precautionary principle” — which requires an ecological assessment of the area to estimate a new project’s impact — before issuing approvals to the mining company.

The court said the impact of the mining company’s project on the endangered Tasmanian masked owl wasn’t considered. While an assessment will still take place, this is a major victory for environmental and endangered wildlife protection.

While urban gardens are growing in popularity, land access and availability can still be an issue. Recognizing this barrier to growing healthy, local, affordable food, a library and members of the community worked together to create the world’s first “library farm.”

In 2011, about 40 members of the Cicero Branch of the Northern Onondaga Public Library in Upstate New York planted seeds on an empty plot of library-owned land to see if it would produce food — and it did.

Now, the Library Farm and its programming have grown so much that it’s collaborating with local community organizations which provide seeds, seedlings, compost, mulch, and other resources needed to keep the farm operating.

The Biden Administration announced plans to cancel $10,000 in student loan debt for borrowers earning less than $125,000

​​​​​​​​Additionally, borrowers who received Pell Grants — loans specifically for those from lower-income backgrounds to pursue higher education — are eligible for an additional $10,000 forgiven, helping ensure the debt relief goes to those who need it most.​​​​​​​​

​​​​​​​​​The administration's plan will likely face legal challenges, so when exactly the forgiveness will come is uncertain. While more needs to be done to address the rising cost of higher education, inequality in access and opportunity, and more — we're celebrating this starting point and are hopeful it will lead to addressing even larger issues with higher education and student loan debt.

According to Azure, most 3D-printed homes use a concrete mix to form the structure, but using plastic offers more flexibility in design, and gives a “second life” to plastic that would otherwise have ended up in a landfill or burned, emitting toxic fumes into the atmosphere.

A hummingbird that was believed to be extinct was just spotted in Colombia. The emerald green Santa Marta sabrewing was officially documented for the second time since it was discovered in 1946.

Taking another large step to reach its climate goals, India just passed an energy conservation bill. The bill makes it easier to put a price on carbon and encourages the use of non-fossil fuel sources to generate power.

Helping more than 3 million people, a nonprofit organization has forgiven $6.7 billion in medical debt. RIP Medical Debt purchases bulk amounts of medical debt at a discount, forgiving $100 of debt for about $1.

Since it launched in 1995, Dolly Parton’s Imagination Library has given out more than 187 million free books to kids. Ohio’s governor declared August 9 “Dolly Day” — the state has the most enrollees in the book giveaway program.

Pennsylvania’s governor signed an executive order banning conversion therapy in the state. Conversion therapy is a discredited form of therapy for minors that seeks to change their sexual orientation or gender identity.

A 17-year-old designed a motor that could make manufacturing electric cars even more sustainable. His design is made without magnets made from rare-earth elements, which can have a high financial and environmental cost to extract.

Despite a history of underrepresentation in the industry, a crew of entirely Black women operated a flight from Dallas-Fort Worth International Airport. The flight celebrated the 100th anniversary of the first Black woman to earn a pilot's license, Bessie Coleman.

As climate change makes water more scarce in the Mediterranean, ancient farming practices are helping. Terracing has been used for centuries to help prevent fire, moderate temperatures, and make farming possible even when water is scarce.

Museums in New York are now legally required to note which artworks were stolen by Nazis. “We are united in our solemn commitment to Holocaust survivors: We will never forget,” Governor Kathy Hochul said.

The first-ever member of Gen Z just won a primary for Congress. 25-year-old Maxwell Frost won the Democratic primary in Florida’s 10th District and is expected to win the general election in November.

Migrant groups in Spain self-organized to get both their rights and legal residence. Spain’s convoluted immigration and naturalization laws make it harder for undocumented migrants to find a path to citizenship.

Members of combatant groups in Burundi are now working together to rebuild the forests they destroyed during a civil war. Burundi has just 6.6% of its original forests remaining, and launched a national reforestation program in 2018.

New research found it’s possible to electrify 40% of the world’s fleet of containerships by the end of the decade. And, we can do it cost-effectively using current technology.

Researchers in Australia just made coral reproduce for the first time in the middle of winter. The spawning is a breakthrough int he race to restore the Great Barrier Reef.