The 'Great Blue Wall' Will Help Save the Oceans 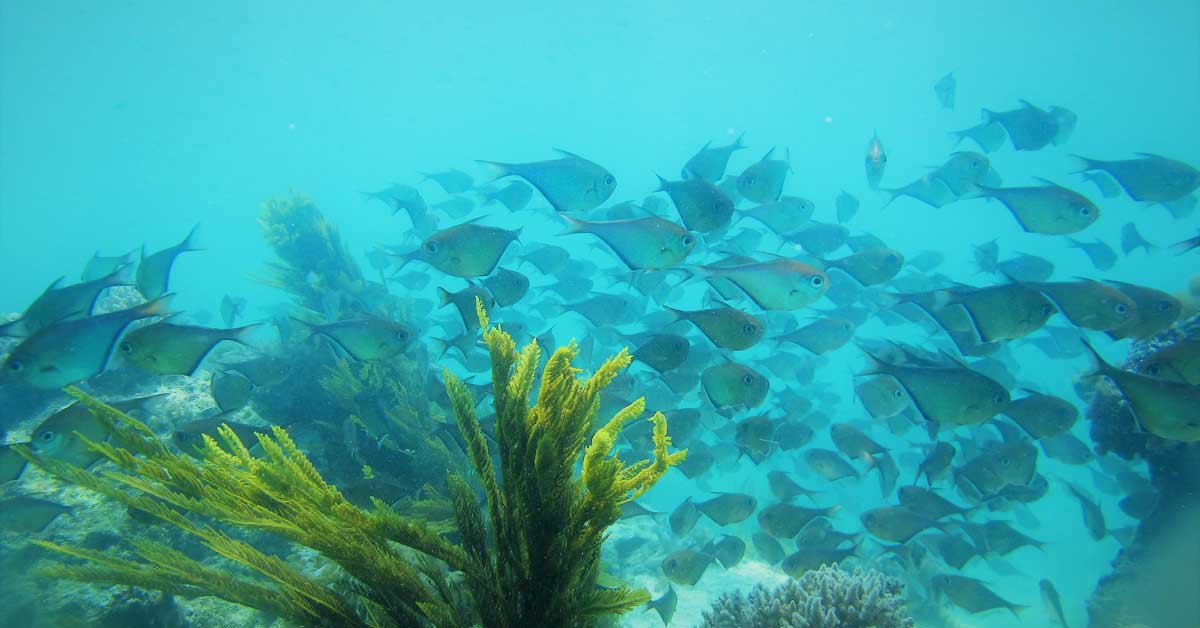 Ten nations in the western Indian Ocean committed this November to create a network of marine conservation areas to hasten progress toward the goal of protecting 30% of the oceans by 2030.

— Less than 10% of the marine expanse in this region currently enjoys protection, and a recent assessment highlighted the price of failure: all the coral reefs are at high risk of collapse in the next 50 years.
‍

— The focus of these efforts won’t just be coral reefs, but also mangroves and seagrass meadows, a lesser-known underwater ecosystem critical for carbon sequestration and oceanic biodiversity.
‍

— Even as overfishing and warming take a toll on marine health, threats from oil and gas extraction are intensifying in this corner of the Indian Ocean.
‍

Ten countries in the western Indian Ocean are banding together to create a network of marine conservation areas under the banner of the Great Blue Wall.

The idea is to push through conservation areas, including those that straddle national boundaries, to bridge the gap between how much of the ocean is protected and how much needs to be secured.

A recent assessment revealed the cost of failing to do so: coral reefs in the region are at high risk of collapsing in the next 50 years.

“Most of what needs to be done is already happening, governments are creating Marine Protected Areas [MPAs], local communities are setting up locally managed marine areas,” said Thomas Sberna, a regional head for Eastern and Southern Africa at global conservation authority the IUCN. “But is it happening fast enough, is it big enough? No.”

Only around 5-8% of the marine area in the Indian Ocean is under some form of legal protection, a far cry from the goal of protecting 30% of Earth’s land and oceans by 2030. Known as “30 by 30,” this goal has gained traction globally ahead of a landmark biodiversity summit this year.

The focus of these efforts won’t just be coral reefs, but also mangroves and seagrass meadows, a lesser-known underwater ecosystem critical for carbon sequestration and oceanic biodiversity.

Sberna, who works on marine and coastal resilience, said this network would include sites that are neither conventional MPAs nor locally managed marine areas (LMMAs).

The former employ a top-down, centralized management approach usually led by government, while the latter rely on local management usually by communities, and often in partnership with NGOs and government entities.

There’s a long history of protected areas associated with exclusionary conservation. In the marine context, for example, no-take zones can impinge on the livelihoods of local fishers.

The Great Blue Wall is modeled on Africa’s Great Green Wall. Last year, the greening initiative, launched in 2007 to curb desertification in the Sahel region bordering the Sahara, secured billions of dollars in funding as the movement to tackle climate change gathered momentum.

“It is an opportunity to try to ride that wave, to adapt it for coastal and marine areas,” Sberna said.

Sberna and others like Aboud S. Jumbe, an environmental scientist with the Tanzanian government, say pressing forward as a group can help attract funding not just from international donors but also private entities.

Tanzania is developing the first block of the Great Blue Wall: the Tanga Pemba seascape. The Pemba Channel runs between the Tanzanian mainland and the Zanzibar archipelago.

The new transboundary marine area will lie north of the Tanga Coelacanth Marine Park along the coasts of Tanzania and Kenya. Ireland is supporting this program with a 400,000 euro ($452,000) one-year grant.

The transboundary area hosts a plethora of unique coastal systems, from mangroves to coral reefs, and intertidal reef flats to seagrass beds.

“Corals, mangroves, and seagrasses are vital organs of the ocean. Like a human body, if you don’t take care of those organs, the rest of the ocean will not survive,” Sberna said.

The latest update on coral reefs is alarming. This region, which hosts 5% of all the world’s coral reefs, is being ravaged by ocean warming and overfishing.

“We detected overfishing of top predators on all the reefs from which we had data,” sad Mishal Gudka, a senior scientist at coastal research institute CORDIO East Africa and co-author of the 2021 study that revealed the risk of coral reef collapse.

“These results highlight the need to improve local fisheries management to ensure the health of reef systems and secure sustainable fish stocks.”

Existing protected areas are also falling short in keeping these dangers at bay, even within their own boundaries.

A report that looked at the expansion of MPAs, notified at the national level, found that legislation governing them is uneven across countries in the western Indian Ocean.

Enforcement is an issue, as are lack of personnel and funds, and policies that don’t always align with the science.

Rapid expansion can often come at the cost of quality protection. The Marine Protection Atlas, an online database of protected areas across the world, found that of the about 8% of marine area under MPAs, only around 3% can be considered “fully or highly” protected from fishing impacts.

Even as these challenges persist, threats are multiplying in this corner of the Indian Ocean. The discovery of oil and gas deposits off East Africa, particularly in Mozambique, Tanzania, and Kenya, has already skewed marine conservation calculations.

Oil and gas activity could endanger marine biodiversity hotspots, a 2017 WWF report said. The development of IUCN category VI protected areas could block oil and gas extraction in those areas.

Transboundary cooperation exists in various forms in the region. The members of the new initiative are all members of the Nairobi Convention, signed in 1985, that promotes the sustainable management of the region’s marine and coastal environment.

The same countries are also members of a scientific body, WIOMSA.

The Great Blue Wall platform will complement these, Jumbe said, while taking into account emerging realities of a changing climate and greater understanding of the value of the marine ecosystems.

“Many countries, including Tanzania … do not have adequate financial resources to be able to implement their ocean management planning,” he said. “So, any support or partnership for conserving and protecting the marine environment is appreciated.”

Banner image: A school of sweepers (reef fish), in the south of Pemba. Image by Darwin Initiative via Flickr (CC BY-NC-SA 2.0).

This article was originally published by Mongabay.