Emmett Till's Memorial Was Defaced — Here's How To Help 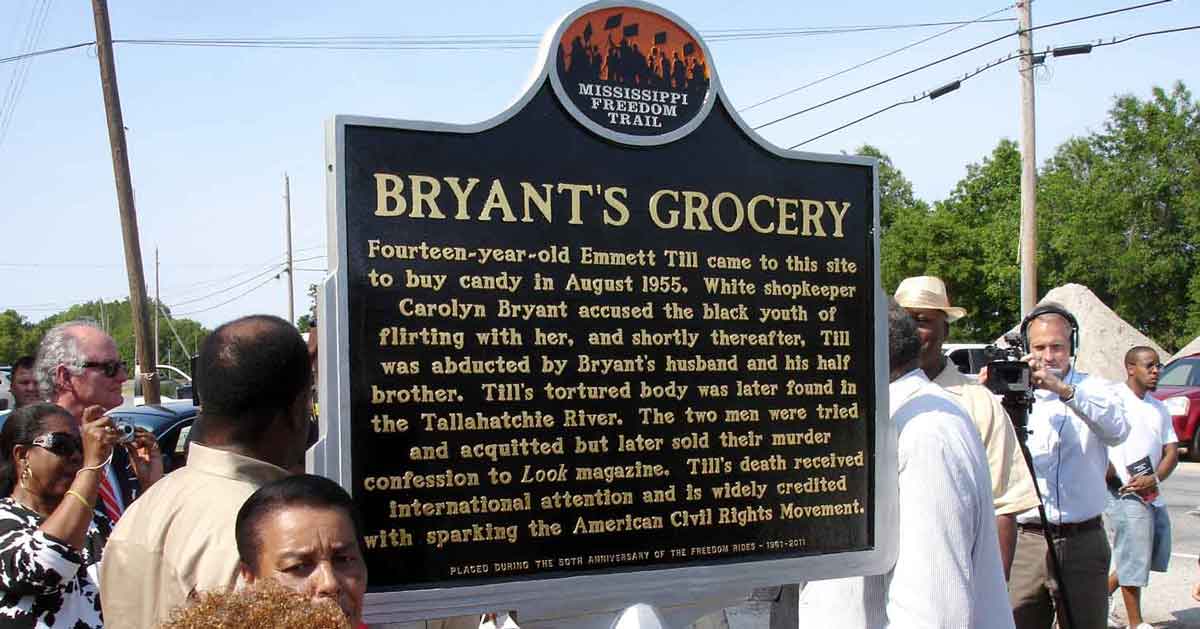 In August 1955, 14-year-old Emmett Till was visiting Money, Mississippi with his family when he was brutally murdered for allegedly flirting with a white woman.

He was abducted from his uncle's home on August 28th, and three days later, his body was found in the Tallahatchie River.

The white woman’s husband and his brother had beaten him nearly to death, gouged out one of his eyes, and then proceeded to shoot him in the head. They had thrown his body into the river, tied to a 75-pound cotton gin.

His body was returned to the family's hometown of Chicago on September 2nd, where his mother insisted Emmett's funeral being public — with an open casket — to ensure the horrors of his brutal murder were fully on display.

Emmett's death, his mother's choice to publicly display his body, and the acquittal of the two men who perpetrated the murder (despite later admitting to murdering him), played a significant role in the instigation of the Civil Rights Movement.

A young Martin Luther King, Jr. led one of many Emmett Till rallies across the country. Rosa Parks, who was in attendance, cited that rally and the murder of Emmett Till as an inciting incident that led to her historic protest that launched the Montgomery Bus Boycott.

Rosa Parks is quoted as saying, "I thought of Emmett Till and I just couldn't go back."

Had he not been murdered, Emmett Till would only be 80 years old in 2021. His lynching, and the lynching of countless others at the time, is not ancient history but is very much a part of the present.

Through the years, organizations have worked to preserve Emmett Till's legacy.

The Emmett Till Memory Project is a resource that showcases and offers tours of the significant locations in Emmett's life.

The Emmett Till Interpretive Center was created to help "tell the story of the Emmett Till tragedy and to point a way towards racial healing." The center states that they use art and storytelling to help people process the pain and injustice of Emmett's murder and to help people imagine new ways of moving forward.

And The Emmett Till Legacy Foundation is a nonprofit organization committed to preserving "the memory and legacy of Emmett Louis Till ... and his mother Mamie Till Mobley’s hope for justice and that his death will not be in vain."

The organization describes their hope to ensure this painful part of U.S. history won't be repeated — and described their aim to "inspire youth and young adults to reach their fullest potential – something Emmett did not have a chance to do."

History of Defacing Emmett Till Memorials

On September 2nd, The Emmett Till Interpretive Center announced that the historical marker in front of the former Bryant’s Grocery & Meat Market in Money, Mississippi, where Emmett allegedly flirted with a white woman, had gone missing.

According to The Independent, the sign was accidentally knocked off its pole by a construction crew on the 66th anniversary of the return of Emmett's body to Chicago.

Allan Hammons, the president of the advertising agency that made the sign, told the Associated Press that he does not see malicious intent in the damage on this occasion. "It was not defaced in any way," Hammons said.

While it's encouraging to hear that this may have been an accident, there have been countless acts of intentional vandalism against Emmett Till memorials in the past.

Signs have been shot at, vandalized with white supremacist language, and removed.

In 2019, a new marker was erected at the site where Till’s body was recovered. It was the fourth replacement at the location.

According to NBC Washington, the first historical marker was placed in 2008 and was tossed in the river, while the second and third signs were shot at and left riddled with bullet holes.

The most recent bullet-marked sign is now on display at the U.S. History Museum.

The new sign in its place had to be created to be bulletproof.

It's important to continue to preserve the legacy of Emmett Till — and continue to fight for a safer country. It's clear that many organizations, communities, and individuals are committed to ensuring memorials are replaced and that Emmett's death is not in vain.

Unfortunately, the replacement markers come at a significant expense. And there's still work to be done in ensuring that Black men and women are safe in this country.

Here's how you can help preserve the legacy of Emmett Till:

Make a Donation to Preserve the Legacy of Emmett Till

They also are responsible for many Emmett Till historical markers.

You can make a donation to support their ongoing work at emmett-till.org.

On Friday, Patrick Weems, the executive director of the Emmett Till Interpretive Center, told Newsweek, "One solution is for a National Historic Park designation so that Bryant's Grocery and other Till sites will be protected by the federal government... We are asking all members of the public to sign our petition to create a National Park honoring Emmett Till and Mamie Till-Mobley."

You can sign the petition to create a National Park honoring Emmett Till and Mamie Till-Mobley at tillnationalpark.org/petition.

Call for Legislation to Support Black People in America

Lynching is still not a federal crime in the United States, but advocates have been pushing for legislation that changes that. The energy around a bill to address this issue grew in the aftermath of the unjust murder of Ahmaud Arbery.

In 2020, the Emmett Till Antilynching Act passed the House by a vote of 410 to 4 and was backed by 99 senators. Senators attempted to pass the bill by unanimous consent — which allowed one senator, Rand Paul of Kentucky, to essentially put a halt to the bill.

In 2022, the House once again passed a bill bearing Emmett Till's name. Three Republicans voted against it. Paul, who previously objected to the 2020 version of the bill, has indicated he plans to vote for pass the bill in the Senate.

You can contact your elected officials and ask them to push for the successful passing of the Emmett Till Antilynching Act.

Good news update: After more than 100 years and 200 attempts, the U.S. has finally passed an anti-lynching bill. President Joe Biden signed the Emmett Till Anti-Lynching Act in the Rose Garden of the White House on Tuesday, March 29, 2022.

You can donate, sign a petition, and call your elected officials. 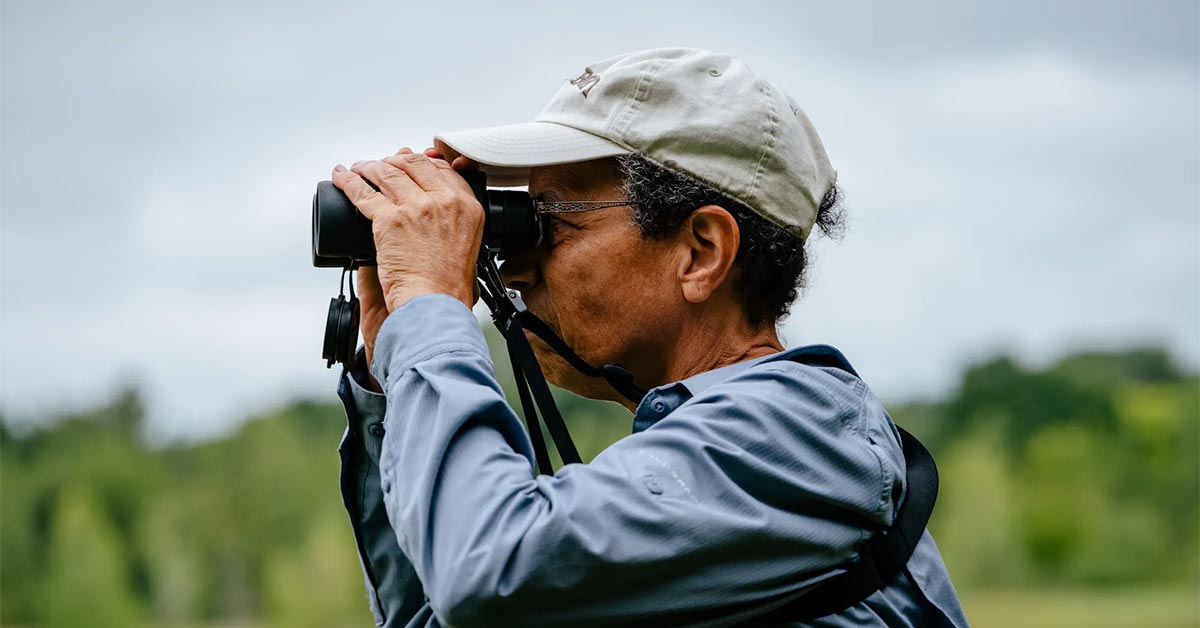 Developing a Black-focused birdwatching group for people of color in Michigan took a dogged willingness to bypass those standing “in the way.”
No items found.