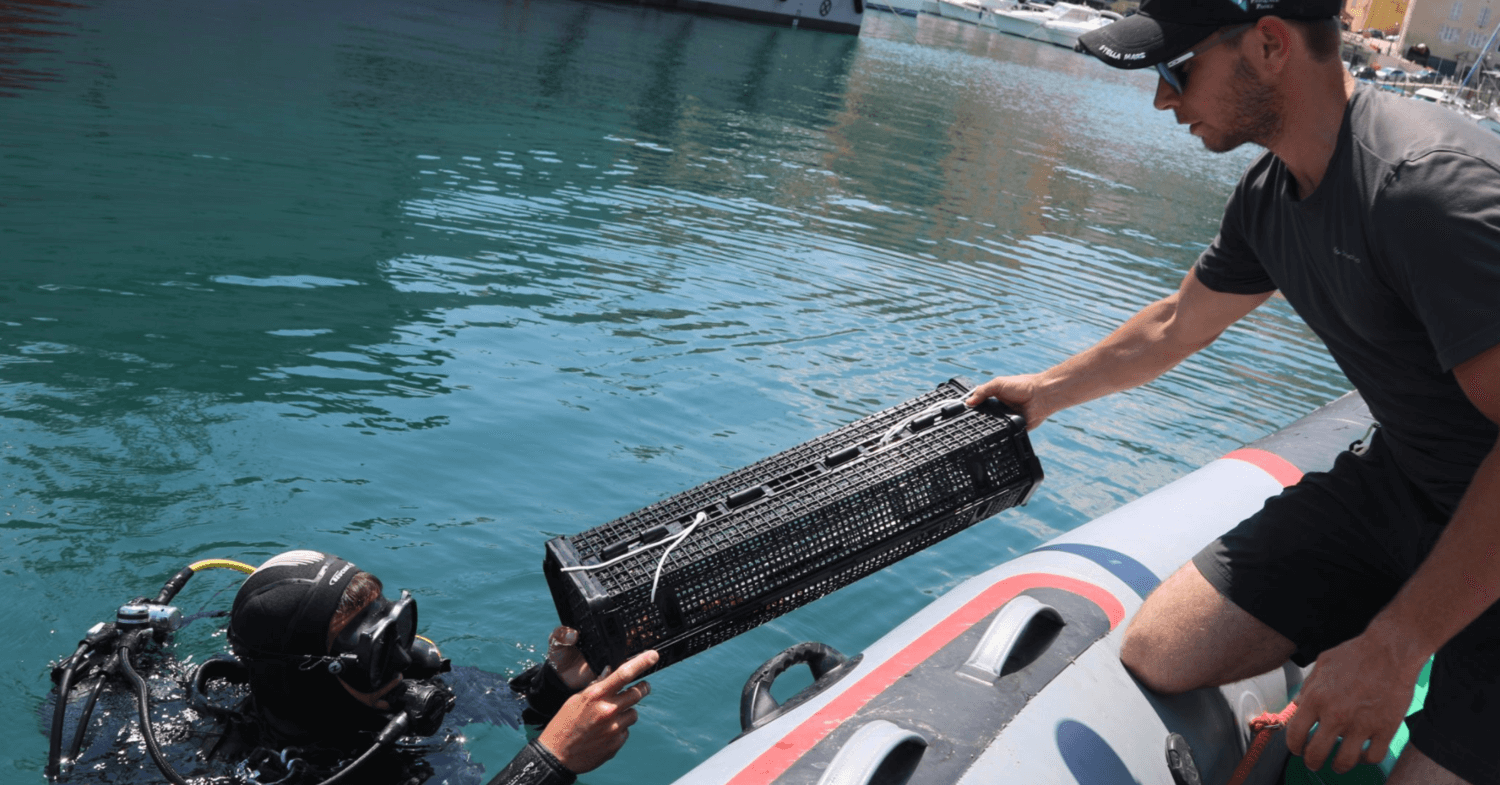 Along the edge of Bastia’s colorful, seafood restaurant-lined port, a wetsuit-clad diver plunges beneath the surface with a large black cage full of oysters in hand and carefully attaches it to an underwater hook on the boardwalk. Resurfacing a few seconds later, the French diver takes another cage to fit alongside the dozens of others already in place.

“The oysters are ready,” he gasps, slowly clambering back on board the small boat laden with ropes, diving gear and empty cages. “Now we just have to let them do their magic.”

In a reversal of norms, instead of extracting this delicacy to serve up at the nearby waterfront eateries, the team from Corsica University’s marine research institute Stella Mare is depositing the oysters into the sea — and instead of cleansing the palates of hungry diners, these industrious mollusks are being used to clean up the water.

The project, which launched in the Corsican city Bastia last September and is now in the second of three phases, will see a total of around 150,000 juvenile Ostrea edulis, commonly known as the European flat oyster, deployed to help depollute the port.

“We wanted to see what would happen if we introduced oysters, what pollution would be cleaned from the water and what would remain in the oysters’ shells,” says Sylvia Agostini, lead of the project for Stella Mare. “Normally, you can’t treat PCBs [an industrial chemical known as polychlorinated biphenyls]. But it’s proven to be a revolutionary method.”

Agostini’s team initially tested the impact of both oysters and sea anemones on pollution levels in the 260,000 cubic meter port. But while the latter struggled to survive and few were left after a year, around 80 percent of the oysters survived — those that didn’t largely suffered due to boat traffic rather than pollution — and water quality has already improved. Monthly checks and quarterly in-depth analyses of water samples for contaminants will be carried out in Bastia’s port for three years. Leftover oyster shells will then be upcycled as construction materials such as roof tiles.

The species naturally filters water in order to absorb nutrients and grow their shells. But scientists have discovered that a byproduct of this oyster growth process is that harmful pollutants such as phosphorus, pesticides, pharmaceuticals and nitrogen from fertilizers, which are difficult to remove from water and can persist for decades if left alone, are also extracted from the sea.

Overfishing, disease, pollution, poor water quality and dredging have dramatically altered oceans over the past century, pushing some species to the brink of extinction. But proponents believe Stella Mare’s method could be a low-cost, relatively simple solution to improve the health of our oceans.

Oyster habitats are crucial for marine ecosystems, and biodiversity levels are known to increase dramatically around reefs, which also act as barriers against storms and sea tides, mitigating erosion and flooding, according to Boze Hancock, senior marine habitat restoration scientist at The Nature Conservancy, a global environmental organization.

“The decline of global oyster reefs has been enormous,” says Hancock. “Oyster habitats clean the water for seagrass, influence wave dynamics and improve shoreline protection. Restoring them has the potential to do a lot of good things.”

However, Hancock warns that oyster reefs can’t, as some have suggested, replace traditional waste water processing facilities. “These habitats are part of the solution, not all of it,” he explains. “You can’t put in enough oysters to process what a waste water plant would. We need to try to stop these pollutants from going into the water in the first place.”

For the team at Stella Mare, while improvements in water quality have been made, there is also no guarantee that the model will be instantly replicable in other parts of the world — or even parts of Corsica.

“Each place is slightly different, in relation to the quantity and variety of pollutants, and we need to adapt to that,” says Agostini, who will be carrying out testing at several sites across Corsica. “Will some pollutants be toxic for the oysters? The water salinity, temperature and pH can vary too.”

Nonetheless, there is optimism that the project, which is being funded by the European Union, will stimulate other successful efforts across the continent. “The objective is to be able to use this method to purify polluted sites in a natural way,” she adds. “If it works, why not export that savoir-faire elsewhere?”

Other similar restoration efforts support the belief that it could be widely replicated. One project in the U.K. found 95 different species growing on reefs after oysters had been introduced, including European eels, which are classified by the IUCN as critically endangered. The Billion Oyster Project in New York Harbor, meanwhile, aims to distribute one billion live oysters by 2035 — enough to filter the entire harbor every three days.

“It could help protect and restore critical coastal habitats like saltmarsh, mangroves, coral reefs and seagrass, as well as the communities that live in these areas,” says Hancock, who is also a professor at the URI Graduate School of Oceanography.  “The potential is huge.”

This story is part of the SoJo Exchange from the Solutions Journalism Network, a nonprofit organization dedicated to rigorous reporting about responses to social problems. It was originally published by Reasons to be Cheerful on August 6th, 2021.

These industrious mollusks are being used to clean up the water