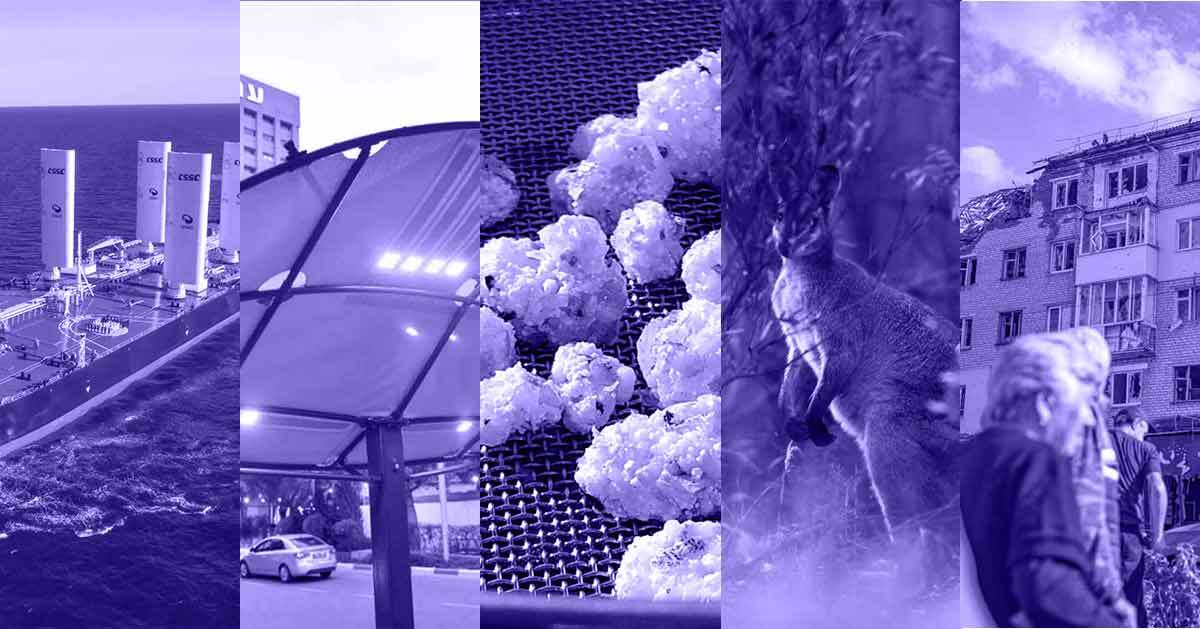 As the shipping industry looks to lower its carbon footprint, one shipping company introduced a “supertanker” whose four, 130-foot sails reduce average fuel consumption by nearly 10%.

The technology behind the sails is pretty revolutionary, too. The lightweight sails are retractable, made with corrosion-resistant carbon fiber, and are programmed to constantly monitor the wind and weather conditions to continually adjust the angle of the sails to make the most out of the available wind.

While 10% may not seem like a lot (there is still a long way to go to decarbonize the industry), it’s good progress to celebrate. For example, on a route from the Middle East to the Far East, fuel savings would prevent an estimated 2,900 tons of carbon dioxide emissions per trip.

According to a new report from energy think tank Ember, in the first six months of 2022, global electricity demand increased by 389 terawatt hours (TWh). Wind, solar, and hydroelectric energy generation increased by 416 TWh — meeting and exceeding the rise in demand.

Wind and solar alone met 75% of the demand, and the three together prevented a possible 4% increase in fossil-fuel generation, $40 billion in fuel costs, and 230 million tonnes of CO2 emissions.

“Wind and solar are proving themselves during the energy crisis,” said Malgorzata Wiatros-Motyka, senior analyst at Ember. “The first step to ending the grip of expensive and polluting fossil fuels is to build enough clean power to meet the world’s growing appetite for electricity.”

As people and places around the world get more creative, strategic, and productive with their clean energy installations, we’re hopeful there’s only more good news to come on this front.

Research shows that standing in the shade can reduce perceived heat by 15 degrees Fahrenheit compared to direct sunlight, hugely mitigating health threats such as cardiovascular and respiratory disorders, heat stroke, and even death.

At least 363 Israelis died during heatwaves between 2012 and 2020, and heat waves will only worsen as climate change worsens.

Tel Aviv is taking these figures and the role shade can play in mitigating extreme heat seriously, even in an urban environment. They’ve added “Lumiweave” shaded structures that give off light at night, created “shade maps” that document shaded public spaces, and more.

An estimated 14 million metric tons of microplastics are currently on the ocean floor. These plastics are especially bad for the planet because their minuscule size makes them difficult to detect, collect, and remove.

A German company has developed a new solution to cleaning up microplastics before they can reach the ocean ​​using whirlpools and a special gel that clumps the microplastic pieces together so they float to the surface and can be easily collected.

The gel is non-toxic and can be used in any kind of water, from saltwater to freshwater.

Australia is setting aside at least 30% of its land for conservation to protect endangered, rare species

In an effort to protect both plants and animal species that are found nowhere else in the world, Australia announced it will set aside at least 30% of its land for conservation.

According to its most recent environmental report card, Australia has lost more animal species than any other continent, and among the world’s richest countries has one of the worst rates of species decline. The number of species newly listed as threatened or at a worse risk status grew by 8% since 2016.

In response to the report, the Australian government issued new protections for 110 species and 20 places in the country, increasing conservation areas by 50 million hectares for at least the next 10 years.

In the midst of an enormous global geopolitical event, rife with countless atrocities, Ukraine is now facing another major humanitarian crisis within its own borders: over 8 million internally displaced persons (IDPs).

Many IDPs have chosen to stay in Ukraine for any number of reasons — to join the resistance, to remain with family, or because they cannot leave due to disability or financial limitations. And IDPs don’t receive the same support as refugees who flee to another country.

However, individuals, businesspeople, and nonprofits have come in to fill that support gap. Like MoveUkraine, which is helping refurbish and repurpose existing buildings to provide safe, secure, and dignified housing for as many displaced folks as possible.

This week, the United Kingdom’s National Health Service (NHS) blood supply reached a critical shortage, prompting the service to send out an Amber Alert asking for donors. While they usually keep six days' worth of blood in stock, the supply had fallen critically low to just two days.

Within 24 hours of the alert going out, 10,000 appointments had been booked to donate blood in the weeks to come.

Over 166,000 people visited the donation website, the most since the pandemic began, and 7,500 people registered as new donors, the most in the last 20 years.

"This is an amazing response from the public and we have been reminded in the last 24 hours of the incredible goodwill and spirit of the public towards helping patients in times of great difficulty," an NHS Blood & Transplant official said.

The 2022 Nobel Peace Prize was awarded to an activist and two human rights groups helping amidst the war in Ukraine. The activist, currently in jail in Belarus, and the organizations have worked to highlight human rights abuses in the region. (You can also check out the 2021 nominees.)

A farm in Italy is making car fuel from cow poop. The farm has a system that extracts bio-methane from animal waste and transports it directly to a pump for customers.

Agricultural scientists and farmers figured out how to make the soil in Western Australia twice as productive. By re-engineering the soil, they found it was possible to more than double the amount of grain grown.

For the first time in history, the U.S. appointed a diplomat to represent plants and animals. Monica Medina will be the first-ever special envoy for biodiversity and water resources.

Slovenia just became the first Eastern European country to legalize same-sex marriage and adoption. The Slovenian government passed the new amendment after a court ruled the previous law was discriminatory against gay and lesbian couples.

In Baltimore, a nonprofit is using the popular Black youth hobby of dirt biking to teach STEM. Rather than criminalizing the hobby, B-360 sees it as an opportunity and has already worked with over 8,500 young Baltimoreans.

An Australian power grid larger than the U.K. is being dismantled as farmers switch to renewables. Thousands of properties in Western Australia are being taken off-grid as they install solar panels instead.

The San Antonio Spurs hosted an open practice and community fair for Uvalde, Texas residents. The Spurs brought their practice to Uvalde to support and bring a bit of joy to the students, families, and community in the aftermath of the shooting.

Conspiracy theorist Alex Jones was ordered to pay nearly $1 billion to Sandy Hook Victims’ families. Jones was found liable for defamation and had spent years falsely claiming the shooting was a hoax and the victims’ families were complicit actors.

Digital identification cards are helping refugees in Cameroon access education, jobs, and bank accounts. The IDs are life-changing, as without them refugees often face discrimination and abuse.

A record number of Indigenous women are running for office in Brazil. After watching other people make decisions that impacted their lives and land, the increase is part of an effort to increase representation in government.

The recently announced increase in Social Security benefits will also benefit millions of children in the U.S. The most recent Census found about 2.4 million grandparents are responsible for their grandchildren.

For the first time on record, renewables fully covered Greece’s electricity demand. For more than a few hours, all electricity being used in the entire country came completely from renewable sources.

REI just made its #OptOutside campaign to close all its stores on Black Friday a permanent policy. Since 2015, the outdoor retailer has encouraged consumers and paid employees to do anything but spend the day shopping.