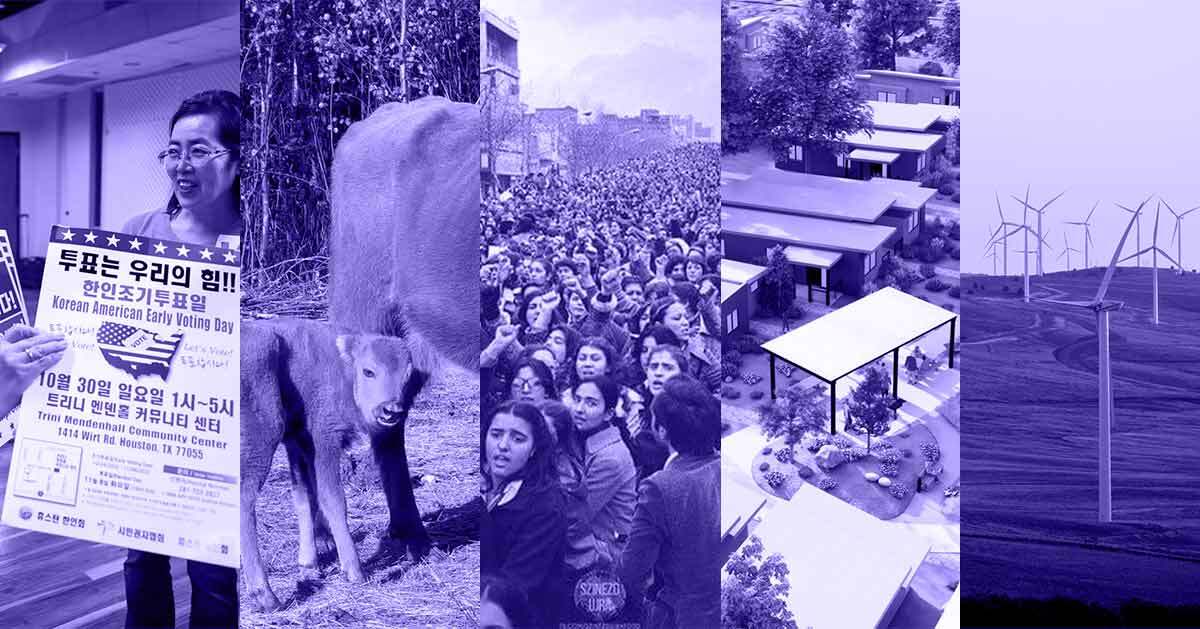 A recent report found that more than half of Asian Texans — the fastest-growing demographic in the state — believe the government has not done enough to help with access to election, candidate, and other information in their own languages. The gap in accessible information leads many to not participate in elections at all.

While some counties have been required by federal law to offer materials translated into Vietnamese, since more than 5% of the population speaks it, Asian American and Pacific Islander communities speak more than 100 languages — so a huge gap remains.

The nonpartisan organization Asian Texans for Justice and others in the state are working to help close that gap by offering a variety of language assistance resources: translating election information and candidate bios, creating election protection hotlines, and more.

For the first time, investment in wind and solar energy is on track to outpace oil and gas drilling this year

Analysts have found that in 2022, spending on wind and solar projects is projected to reach $494 billion — compared to $446 billion for oil and gas drilling, marking the first time ever more money will be invested in clean energy than fossil fuels.

While it’s discouraging to know that so much money and investment is still going to fossil fuels — it’s a pivotal moment of progress, and a trend worth celebrating as we look to a future where little to nothing is invested in fossil fuels.

Amidst rising fuel prices, fossil fuel production around the world has been inconsistent — it’s gone up in some places, and down in others. In the U.S. specifically, the Energy Information Administration is projecting that renewables will generate more power in the country this year than coal.

All forecasts, trends, and data, though, paint a hopeful picture of a fossil-fuel-free future.

A pioneering rewilding project has resulted in the first (surprise!) baby bison born in the U.K. in thousands of years

In July, a rewilding project in the United Kingdom released three female bison into the wild, with the hopes of familiarizing them with the area, and eventually releasing a male into the area so they could reproduce naturally.

As a defense mechanism against predators, bison mothers hide their pregnancies, so the project didn’t know one of the females was pregnant when they relocated here. She went missing for a few days and had been giving birth in a secluded location.

The calf is the first bison born in the U.K. in thousands of years, and it will help the project study how bison can be “ecosystem engineers” and restore wild habitats. All of Europe’s 9,000 bison descended from just 12 zoo animals, which saved the species from extinction in the early 20th century.

On September 16, the death of a 22-year-old Kurdish-Iranian woman, Mahsa Amini while she was in the custody of Iran’s morality police set off a wave of protests and demonstrations across the country.

Bringing together people from different religions, genders, and more, the protests are the latest, and reportedly greatest threat the country’s regime has faced. For decades, women in particular have led movements to fight for their basic rights.

The women leading these protests against the mandatory hijab law have made it into something even bigger: targeting the very foundations of the regime and its ideological taboos.

To help provide housing for people experiencing homelessness in Utah, the Salt Lake City Council just unanimously voted to approve a project that will lease around eight acres of city-owned land to build a tiny home village.

The 430-home “The Other Side Village” will serve as "recovery housing" and have other services and resources like a clinic, job opportunities, and more.

The city’s mayor first announced the project in April 2021, and it’s both part of a larger tiny house movement to address homelessness, and modeled after a similar and renowned project in Austin, Texas.

The world’s leading energy organization, the International Energy Agency’s (IEA) latest report found that, thanks to a rise in planned government investment in clean energy following Russia’s invasion of Ukraine, carbon emissions from energy will peak in 2025.

The IEA called the investment a “historic turning point” in the transition away from fossil fuels. Planned investments by governments around the world will total $2 trillion by 2030.

Unfortunately, according the IEA, current government policies lead to global temperatures still rising to 2.5 degrees Celsius. Now that governments can see how implementing and investing in clean energy puts the world on a better trajectory — we’re hoping to see all the necessary investments in clean energy.

An Iranian woman is using technology to unite Iran for change

With a background in environmental activism, she put her skills to use to create United for Iran, an independent nonprofit focused on civil liberties in Iran.

United for Iran has, among other things, created the “Irancubator,” which uses technology to support communities in Iran, the Iran Prison Atlas, a massive, interactive database of all the political prisoners in Iran, and an app that serves as a period tracker and helps women understand of what their legal rights are.

Though Mahmoudi is blacklisted and cannot visit the country, the influence and impact of United for Iran is at work even today amidst the current protests — all with a vision for a better Iran.

With the help of students, an organization is restoring New York City’s once-flourishing oyster beds. The oysters will help naturally filter the water, attracting other underwater life, and protecting shorelines from future storms.

Iranian men are joining the “fight against darkness” for women’s equality, life, and freedom in Iran. Standing beside women in the streets, some think their joining in the protests could be a watershed moment for the movement.

The U.S. Department of Agriculture is investing $53 million in the WIC nutrition program for women and children. The money will be awarded in grants to improve outreach efforts, improve technology, and enhance shopping experiences.

The suicide rate among U.S. military members dropped by 15% from 2020 to 2021. The Army was the only branch that increased, but in the first six months of this year, it dropped 30% compared to last year.

Carbon emissions from fossil fuels are projected to rise by under 1% this year, well under the 6% rise in 2021. While good progress to celebrate, and proof that it’s possible, emissions need to decline even more dramatically.

Denver launched a wildly popular rebate program to help more of its residents get and use e-bikes. After the first rebate vouchers were claimed within days of launching, the city released more and they were gone in minutes.

Student protesters flooded the field during the University of Pennsylvania’s homecoming football game to demand change. They want the university to “be a good neighbor” and save a low-income housing complex, pay its fair share in property taxes, and end fossil fuel investments.

Zimbabwe just became the first country in Africa to approve an HIV prevention drug. The World Health Organization called it a “crucial step” and offered its support to develop programs to implement the drug safely and effectively.

Some U.S. states are getting more than $66.7 million for conservation efforts to protect the most at-risk species. The funding will go to 16 states and Guam and cover over 13,500 acres of habitat for 162 species.

The employment rate for workers with disabilities reached 23.3% in November 2021 — the highest since 2008. Disabled workers have long been fighting for remote work and more flexibility, and the pandemic has resulted in a positive shift.

A huge marine reserve in the Pacific Ocean has led to the recovery of tuna and other migratory fish in the area. Fishing is banned in the Papahānaumokuākea Marine National Monument and its helped species recover in surrounding waters.

NASA and the NOAA just confirmed the ozone layer is still shrinking. The ozone hole reached an average area of 8.9 million square miles this year, continuing an overall shrinking trend.