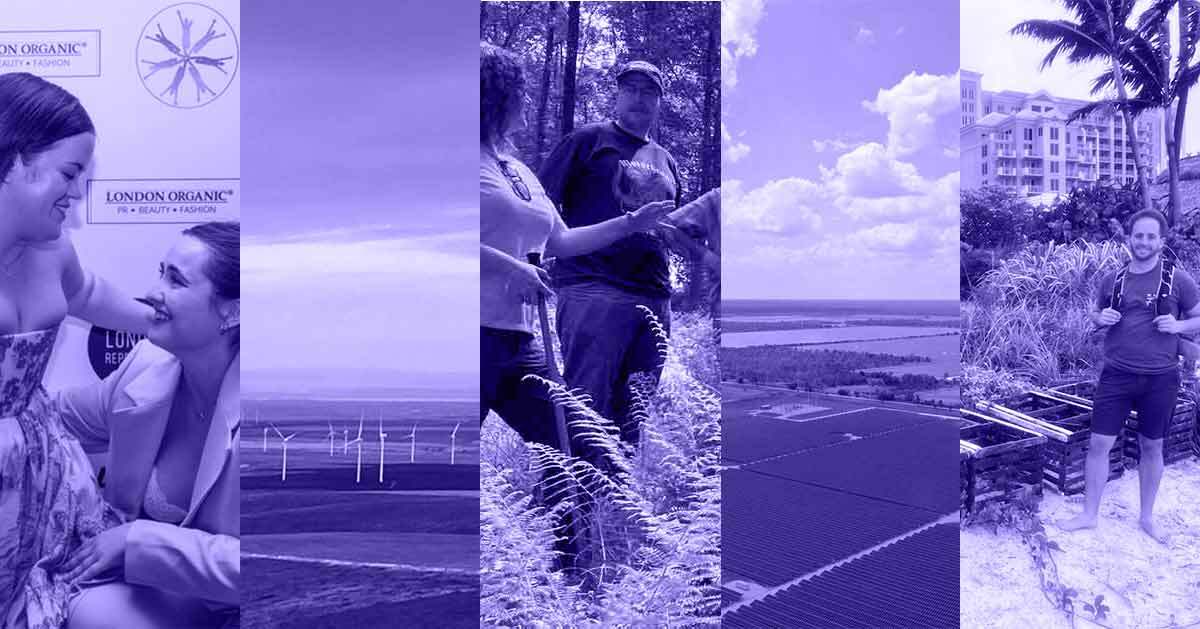 After meeting a teenager with dwarfism while studying fashion in college, Chamiah Dewey was made aware of a serious gap in the clothing market. Dewey then spent the next few years working on her clothing brand and researching and designing her first collection.

The first Chamiah Dewey Fashion clothing collection launched earlier this year, created and designed exclusively for people 4’10” and under. It just made its runway debut featuring models with dwarfism at London Fashion Week.

Dewey said it was the best day of her life, and that “You could see they were finally seen and heard. I cried because it was just so amazing and impactful. All I wanted to do was make people with dwarfism or short stature feel confident and happy in clothes.”

Since 2020, more than four dozen guaranteed income programs have been rolled out in cities around the U.S. In addition to places like San Diego, Minneapolis, Denver, and Atlanta, the largest program was rolled out in Los Angeles. There, 3,200 people with at least one child and an income below the federal poverty line are benefiting from the program.

The idea behind them is by providing the most vulnerable people in a community with the funds to meet their basic needs is the best way to close the wealth gap and help people build a more stable life. And while some believe they incentivize people to not work, it’s also true that they help place value on “work” that traditionally doesn’t receive compensation — like caregiving, parenting, and more.

We’re thrilled to see more cities trialing these programs so we can gather more data on whether or not they are a viable, sustainable way to uplift people, especially historically marginalized people, in a community.

A small town in Oregon is home to the first utility-scale plant that combines wind energy, solar energy, and large batteries

With the capacity to power 100,000 homes, the first utility-scale plant combining wind and solar energy as well as onsite batteries just opened in a small town outside of Portland, Oregon. While many renewable energy installations have onsite storage, this is the first to do it at this scale.

When operating at maximum capacity, the Wheatridge Renewable Energy Facility can produce over half the power that was generated by Oregon’s last coal plant, which was demolished in August.

Since the facility can store energy onsite, it’s addressing a key challenge in the clean energy transition — not relying on fossil fuels for energy when the wind isn’t blowing and the sun isn’t shining.

Though logging is common in regions like rural Pennsylvania, smaller-scale landowners are finding a better use for their forests. The American Forest Foundation’s Family Forest Carbon Program helps landowners with as little as 30 acres do something new: access fast-growing “carbon markets”.

These forests absorb and store carbon, and the credits for that effective reduction in climate-changing emissions will in turn be sold to help corporations such as outdoor outfitter REI move toward their “net zero” emissions goals.

Just 12 miles northeast of Fort Meyers — a community devastated by the hurricane with total loss of power, water, and massive loss of life — another community not only came through the hurricane just fine but never even lost power.

Babcock Ranch is Florida's first 100% solar-powered community with over 700,000 panels providing more than enough electricity for all 2,000 homes — and it’s now helping serve as a refuge for people displaced by the storm. Its streets are designed to flood, homes are built with high winds in mind, and more, and shows the promise of a clean energy future.

Though the southeast coast of Florida didn’t see a lot of damage from Hurricane Ian, tropical-storm-force winds did make it to places like Miami, and they pushed garbage from the ocean depths onto the beach.

Manny Rionda and Andrew Otazo saw old lobster traps, marine rope, and other waste piling up on Key Biscayne Beach and jumped into action to start cleaning it up with the help of a couple of strangers, too.

Not only can the lobster traps in particular cause significant damage to coral reefs and marine life, but they’re also a significant risk to turtles and birds on land. In total, they collected 310 pounds of trash — ensuring it stays out of the ocean and off land, too.

A Florida man who went viral for saving a cat during Hurricane Ian has now raised over $28,000 for displaced pets and people in need

Michael Ross was with his family sheltering from Hurricane Ian in Bonita Beach when he spotted a cat sitting on top of an air conditioner with storm surge flooding rising around it.

A video of him wading through the waters to rescue the cat went viral on social media. Shortly after the video was taken, the storm surge rose even more, washing the home and air conditioner away.

The response to the video was unexpected, and Ross told USA Today, “we're trying to take advantage of that by raising money.”

They started a GoFundMe to raise money to help other displaced pets as well as people in need in the area — so far, it’s raised over $28,000. Oh, and until they can find an owner, the cat is staying with Ross.

In response to recent drownings, cities are investing in youth water safety education through free swimming lessons. Drowning is the leading cause of accidental death for children under 5 in the U.S., and Black children are especially at risk.

The most-polluting coal plant in Australia will close more than a decade sooner than originally planned. It’s responsible for more than 3% of the country’s emissions alone, and will now close in 2035.

Engineers at Purdue University created the whitest-ever paint, which could help reduce or eliminate the need for air conditioning. It has a “cooling power of 10 kilowatts… more powerful than the central air conditioners used by most houses.”

Psychiatrists in Brussels are "prescribing" free museum visits to treat anxiety and stress. Believed to be the first program of its kind in Europe, one of the goals is to reinforce access to culture after the pressured days of lockdown.

A sanctuary farm in Minnesota is helping animals that have been abused, neglected, or have health issues rest and recover. Farmaste Animal Sanctuary provides its cows, pigs, goats, sheep, and more with plenty of space, food, veterinary care, and a comfortable place to live out their days comfortably.

The FDA just approved a new drug to treat ALS that was created with funds raised from the “Ice Bucket Challenge.” $2.2 million of the funds that were raised from the challenge went into funding the development and trial of the new drug.

A hospital in Massachusetts has a treatment team “on call” to help patients struggling with addiction. Similar in scope to having specialists on call for other diseases, the team has already helped treat 448 patients with opioid addiction.

A Ukrainian teenager was named the “global student of the year” for his work on detecting landmines. Igor Klymenko was selected from more than 7,000 students and won a $100,000 prize.

Mackenzie Scott just donated $20 million to a Texas nonprofit working to improve health and health care in the state. It’s the latest in a series of large donations for the billionaire philanthropist.

Beginning in April 2023, New Zealand will ban all animal exports from the country. The new animal welfare law was passed in response to a ship that sunk in a typhoon, killing its crew and 6,000 cattle.

A major Australian mining company is investing billions of dollars to eliminate the use of fossil fuels by 2030. Fortescue says the investment in solar, wind, storage, and more will lower energy costs and help produce low-carbon steel.

President Biden just pardoned thousands of people with federal marijuana possession convictions. He called on state governors to do the same at the state level and says his administration will look into changing how the drug is classified, too.

Years in the making, rare turtles just bred 41 hatchlings at the San Diego Zoo. It makes it the first accredited organization in North America to hatch and raise the endangered Indian narrow-headed softshell turtle.

Backed by groups like the ACLU and NAACP, Delaware just passed a new law that will end fines and fees that criminalize poverty. The state has ranked 46th in the nation when it came to protections against abusive fines and fees.