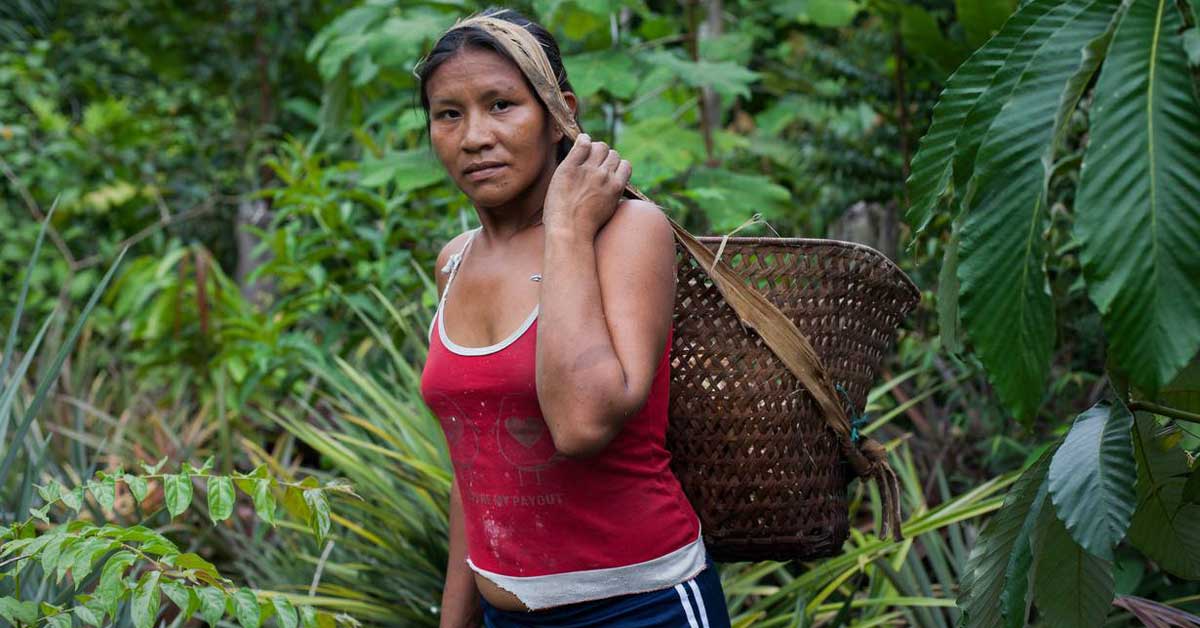 Indigenous communities are widely considered the best guardians of vanishing rainforests. From using farm plots later regrown as forest to looking at nature as having its own rights, here’s why that’s the case

Mirita-Parana, Colombia — Using a machete, Norma Souza Matapi slices a pineapple from its roots and places it into a woven bag slung across her forehead as she tends a family food plot deep in Colombia's Amazon rainforest.

Indigenous communities in this remote corner of southeastern Amazonas province have preserved largely pristine tracts of forest for millennia based on ancient belief systems and a culture interwoven with nature.

"Women take care of the seeds and guarantee that each family and the community has enough to eat, and that food for our dances and meetings is available," said Souza, surrounded by dense jungle in the small riverside community of Bella Vista.

Based on age-old fallow farming techniques, Souza will cultivate this plot for five to seven years and then, using controlled slash-and-burn clearing, switch to a nearby patch, allowing soil to regenerate and trees to regrow.

"We give time for the earth to rest. We live off the forest and so we look after it, taking only what we need," she said, standing next to cassava crops, a medicinal herb garden, and tobacco and coca plants used in rituals.

"We've been living here for thousands of years and there's no destruction of the forest," said Souza, a member of the Matapi Indigenous group.

Indigenous people carry a map in their heads — and sometimes on paper as well — of how their land is divided up, with designated areas for hunting, fishing, and farming.

There are also areas that cannot be touched — both sacred sites and sections of land near small isolated Indigenous groups that avoid contact with others.

"We have to first get permission from the shaman before we cut down any trees, and we can only cut down certain species," said Celestino Yucuna, the community's 'captain' and Souza's husband.

Rules governing fishing also exist — including that setting off dynamite, a method used elsewhere in the Amazon to kill fish, is banned.

And "we don't have cattle. Cattle destroy everything and the soil," he said, as he sharpened a hunting spear used to kill peccary — a small wild boar — and other animals.

Such practices are why Indigenous people — in Colombia's Amazon and in many other parts of the world — are regarded by academics, environmentalists, and many officials as the best guardians of the forest.

Almost half of the remaining intact forests in the Amazon Basin are in Indigenous territories, according to the United Nations.

With deforestation rates still rising across the Amazon, finding effective ways to preserve those remaining strongholds of the planet's largest tropical rainforest will be crucial to tackling both climate change risks and surging losses of nature.

Trees absorb about a third of the planet-warming carbon dioxide produced worldwide through the burning of oil, gas, and coal. They also help regulate rainfall, ensuring more stable moisture for crops and reliable supplies of food.

Establishing and then maintaining Indigenous land rights in the Amazon basin areas of Brazil, Colombia, and Bolivia costs less than $6 per hectare a year, the U.N. researchers found.

They estimated securing land rights to 100 million hectares of Indigenous forests — an area almost twice the size of all Central America — would cost less than $600 million per year.

Evidence of the benefits of Indigenous stewardship of forests is now influencing funding priorities, with more money being spent to strengthen Indigenous cultures and protect their rights and unique knowledge.

Donor governments including Britain, the United States, Germany, Norway, and the Netherlands pledged about $1.7 billion at November's COP26 climate conference to help Indigenous people and forest communities advance their land rights by 2025.

In Colombia's isolated rainforest provinces of Amazonas, Vaupes, and Guainia, a $7.4 million project across 11 million hectares aims to help communities there become 'Indigenous territorial entities', or state-recognized local governments with greater power over their land.

Several hours downriver from Bella Vista, along the Miriti-Parana River that winds through thick jungle foliage of cascading vines and soaring palm trees, lies the Puerto Guayabo community of about 35 families.

Inside a maloka — a meeting place and traditional thatched communal dwelling — lives shaman Evelio Yucuna, who guides the community's relationship with nature.

That includes performing rites to protect farmers from snake bites before granting them permission to burn small patches of land allocated for growing crops.

His broad library of knowledge centers on a core belief that nature — including water and forests — have spirits and an owner, and that permission is needed from that owner to use anything.

Shamans seek permission by performing healing rituals to connect with the spirits in the forest before trees are felled.

"Trees are treated like humans and are the source of life," he said, chewing on green powdered coca leaves and tobacco paste as part of the age-old mambe ritual used to start meetings and connect participants to nature.

"We are a product of nature, we were born from the earth. We live from and depend on nature," he said.

"That's why we care for it and have to defend it," he added, sitting below boxes in the structure's wooden rafters holding traditional clothing and sacred objects used in ceremonial dances.

As a spiritual leader, Evelio Yucuna is responsible for ensuring ancestral cultural practices and beliefs are preserved.

"I have a mental map that I need to transmit to future generations. I have to pass on theory and practice and what's sacred and what isn't. I am the memory of people," he said.

In communities up and down the Miriti-Parana River, such beliefs are taught to children in dilapidated wooden schools on stilts, built by Catholic missionaries who once banned native languages and dance and have since been kicked out.

Indigenous teachers now instruct in both native languages and Spanish, and ensure children learn an ecological calendar, based on cycles of the moon, that helps produce two main harvests a year, allowing communities to be self-sufficient.

Indigenous leaders warn their culture and ancestral lands face mounting pressures from gold miners and loggers, who have yet to encroach into this part of Colombia's Amazon but are moving nearer.

Elsewhere in Colombia's tropical forest and across other parts of the Amazon, including Peru's Madre de Dios region, intermittent gold rushes and illegal mining have turned once-intact forests into dead landscapes of mining craters sunk amid sand dunes.

In the Indigenous worldview, nature is sacred and everything in the forest and its soils — including gold and other minerals — cannot be commercialized.

"Nature has its life and it lends us a service," said Alirio Yucuna, a 44-year-old indigenous leader, sitting on a wooden bench inside a shady maloka.

"It doesn't matter if it's legal or illegal gold mining — it causes the same harm. Gold isn't a product or something to be produced. For us, it's sacred," he said.

Francisco von Hildebrand, head of Gaia Amazonas, a Colombian non-profit that works with Indigenous people to protect the Amazon, said such views are at odds with western culture, in which "we see nature as a collection of objects to be used for human needs".

"Indigenous peoples see nature as a collection of subjects, each with souls, power and an owner" — and that view makes their definition of 'development' very different, he said.

Such Indigenous views are being increasingly integrated into laws in countries from Bolivia to New Zealand granting "rights of nature" to rivers and ecosystems.

Such laws, which now exist in at least 14 countries, might, for instance, prevent the allocation all of a river's water to human users without leaving a share for trees and animals.

It is likely more countries will introduce such laws to address increasing tension between the need to safeguard nature, the climate, and indigenous groups, and growing global demand for beef, soybeans, minerals, energy, and other products.

The pressures are particularly intense on rainforest nations that seek to create jobs, boost export earnings and often prop up budgets with oil and mining royalties — but find it hard to access green funding and are offered too little international finance to instead keep crucial forests intact.

If such incentives and financial pressures are not shifted, everyone will pay the price, indigenous leaders and environmentalists warn.

"Any kind of development must keep our balance and harmony with nature. Otherwise we don't want it and we cease to exist."

Reporting by Anastasia Moloney; Editing by Laurie Goering. This article was originally published by the Thomson Reuters Foundation, the charitable arm of Thomson Reuters, that covers the lives of people around the world who struggle to live freely or fairly