Advocates Are Working To Give Water Legal Rights 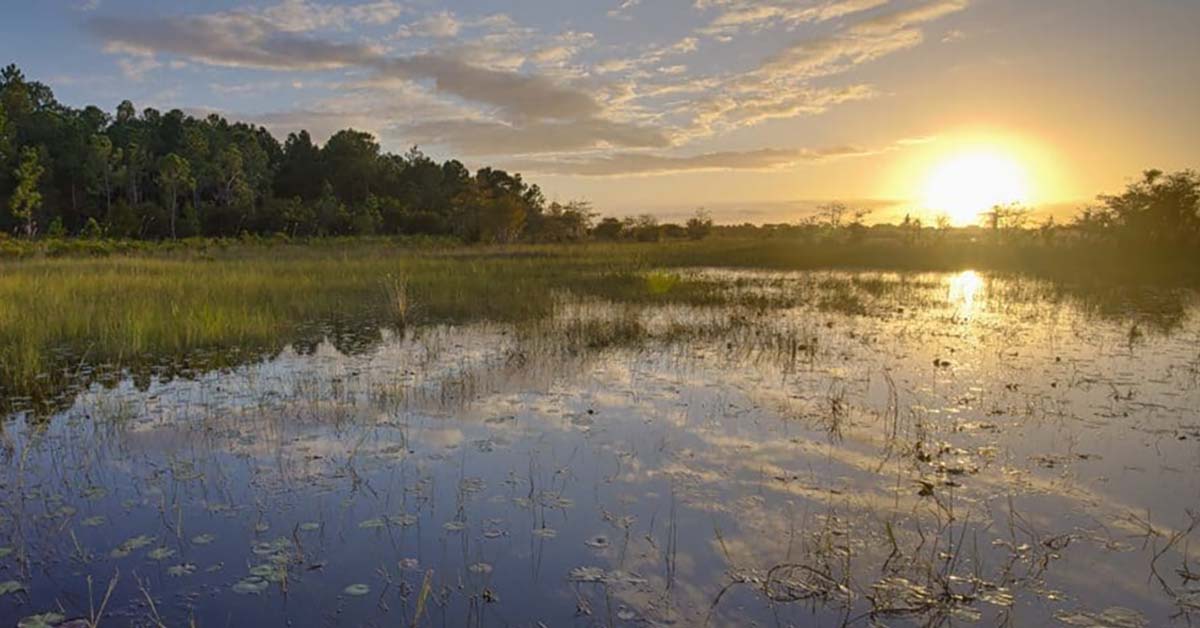 Threatened by development, five bodies of water are suing the State of Florida, making the unprecedented argument that nature has legal rights, too.

Mary Jane is a looker. Her curves hug the Isle of Pine Preserve to the southeast of Orlando, Florida, nearby residents enjoy her coolness for kayaking, and her body of water is part of rather spectacular wetlands that connect her to her twin, Lake Hart. She is also the first lake in the U.S. to make waves by filing a lawsuit.

Beachline South Residential, a developer, wants to take advantage of the region’s growing popularity and convert nearly 2,000 acres of wetlands, pine flatwoods and cypress forest just north of the lake into apartments and offices.

So Mary Jane, Lake Hart, two other local waters, and a marsh in Orange County have done what most Americans who feel existentially threatened would do: They’ve lawyered up.

“We must protect this environmental treasure,” says Chuck O’Neal, the human who filed the lawsuit against the developer and the state on behalf of Mary Jane and her fellow plaintiffs in April 2021 while he was chairman of the Florida Rights of Nature Network.

“Right now, there is a building boom that is leveling forests at record rates and destroying large swaths of nature. It’s important that local governments have the right to protect their environment.”

O’Neal grew up in Orange County and watched developers cement over much of the county, not least with the arrival of Disney World in the 1970s.

Passionate about the local waterways, he launched Speak Up Wekiva in 2013, a campaign to galvanize support for the state’s wildlife and flora. At the time, the Floridian businessman believed the rights of nature movement was “too radical,” but he changed his mind after several weather events in 2018 caused severe water contamination and massive fish die-offs.

“At that point I understood that we needed to change the legal system fundamentally.”

What O’Neal is attempting with the lawsuit on behalf of the water is not just another environmental lawsuit against an eager developer. Asked why he wasn’t filing a traditional lawsuit, he responds that what’s needed is a shift in perspective.

“The current laws are stacked against nature because nature is viewed as property. When you buy a property, you can do whatever you want with it. Our planet needs to take into account that these natural bodies of water, forests, and animals have a right to live.”

Looking at the history of the constitution, O’Neal believes it’s time to expand the definition of rights. “When the Constitution was written, only a certain few people were rights-bearing, generally white property-owning males. The point is that we need to instill rights in our legal system for nature.”

O’Neal is not alone in this belief. In November 2020, Orange County voters approved a charter amendment to protect the “rights of nature” by a margin of nearly 90 percent.

“And that in Florida, where people don’t agree on anything,” he exclaims. “The amendment grants nature four rights: the right to exist, to flow, to be protected against pollution, and to maintain a healthy ecosystem. That, paired with the human right for all citizens to have clean water, went on the ballot, and passed in 2020 with 89 percent of the votes. I consider this monumental for a county of 1.4 million people.”

By advocating for earth laws, O’Neal is taking a page from the playbook of Indigenous Peoples all over the planet.

“I was taught that water is alive. It can hear. It holds memories,” Kelsey Leonard, the first Native American woman to earn a science degree from Oxford University, explained in her viral TED Talk, “Why lakes and rivers should have the same rights as humans.”

The Indigenous leader and Harvard-educated expert in water science would have loved to name her talk “Why nature should get more rights than humans,” she says via Zoom from the University of Waterloo in Ontario, where she is a professor in the Faculty of Environment.

“Humans have a fascination with trying to play God, to dominate nature. Well, nature has something to say about that. Through earth law, we’re trying to remedy the harms past legislation has created.”

Indeed, the definition of a legal “person” has been evolving. Over the last decades, the American legal system expanded legal personhood to slaves, women, children, and corporations.

“As a Shinnecock woman and a legal scholar, I question the moral compass of the Western world where you can grant legal personhood to a corporation but not nature,” Leonard says.

“If you can grant that to a corporation, why not the Great Lakes? Why not the Mississippi River? Why not the many waterways across our planet that we all depend on to survive?”

According to Leonard, the visible destruction of climate change with its wildfires, droughts, and floods drives home the insight for many people that human “dominion” over the earth has devastating consequences if no one is authorized to speak up for nature and its creatures.

“The status quo has allowed us to destroy nature,” she states. “If we are maintaining the status quo, we are not going to do what we need to address climate change. We are at a pivotal point.”

In 2008, Indigenous Peoples led Ecuador to become the world’s first country to formally recognize the “Rights of Mother Earth,” a ruling that the Global Alliance for the Rights of Nature (GARN) and others subsequently used successfully against a construction company that dumped rubble into a river. As a result, the government was forced to clean up the river. Any citizen in Ecuador can now go to court on behalf of nature.

“Rather than treating nature as property under the law, rights of nature acknowledges that nature in all its life forms has the right to exist, persist, maintain and regenerate its vital cycles,” asserts GARN.

Recognizing the inherent right of nature to remain intact would be a wholesale shift of perspective after centuries of regarding it as a resource to be owned, used, and exploited.

In 2017, four rivers in Colombia, India, and New Zealand won legal rights, including the Whanganui River, ​the longest navigable river in New Zealand. The Māori fought for more than a century against the British Crown to save the Whanganui River and finally reached agreements over the last decade that recognize personhood of the waterway and a former national park known as Te Urewera.

In a novel decision, the courts decided that neither the Māori nor the Crown owned the river but that the river is its own being. The Māori and the New Zealand government agreed to share guardianship of the environment.

The U.S. is far behind in these efforts but some communities have started the process. For example, Pittsburgh, Pennsylvania, passed an anti-fracking law that includes the provision that, “Natural communities and ecosystems… possess inalienable and fundamental rights to exist and flourish.”

Some version of nature rights laws now exist in about 20 countries, including Canada, Bolivia and Uganda, as well as half a dozen Tribal Nations in the U.S. (including the Ponca Tribe of Oklahoma, the Yurok and the Menominee) and dozens of cities and counties.

“This process is one of democratization,” Leonard says. “The majority of the world’s religions and cultures have always acknowledged that water is living.” She also believes that earth laws will enable communities to address the threat of climate change much more swiftly and comprehensively.

Ultimately Leonard, and the rights of nature movement more broadly, is calling for nothing less than a fundamental shift in our relationship with our environment, using a responsibility-based legal framework instead of a property rights-based one.

“We can appoint guardians for the water that ensure the water’s rights are always protected. We can also develop water quality standards that have a holistic approach, that ensure the well-being of the water before our human needs. And moreover, we can work to dismantle exclusive property ownership over water.”

If you look at it from this perspective, granting nature rights isn’t a new idea at all. For millennia, people considered themselves as part of the natural world.

Despite these convincing arguments, Mary Jane et al. have little chance of winning in court. As soon as Orange County voted for the bill of rights for its waters, state legislators snuck a last-minute amendment into a sewage bill that prohibits local governments from granting legal standing to a “part of the natural environment.”

O’Neal is waiting for the upcoming hearing on April 26 to see if his case will be dismissed before it has even started. The governments of India as well as courts in Ohio have similarly struck down regional attempts to establish earth laws.

“That’s why it’s important to build consensus, a broad network,” Leonard says. “It is not something that should only be on the shoulders of Indigenous Peoples. It’s about transforming hearts and minds.”

Despite its challenges, O’Neal, like Leonard, believes that the movement might be as hard to stop as a mighty river. “Nothing can stop an idea whose time has come.”

“I was taught that water is alive. It can hear. It holds memories,”