Boise Is Tapping Into Free, Sustainable Energy - and Other Cities Could Follow Suit

In the early 1890s, when Boise, Idaho was booming thanks to a gold rush, a local water company discovered something else east of the city: hot water bubbling up from beneath the Earth’s surface. The company built a wooden pipeline to transport the water to a nearby neighborhood, providing heat for several homes and businesses. This marked the nation’s first geothermal district heating system, which is still in operation today.

A century later in 1983, Boise developed another — much larger — geothermal district heating system for its downtown. Water from a naturally heated aquifer flows through a series of pipes underneath the city’s streets. The energy drawn from this water heats nearly 100 large buildings, including the city hall, banks, hotels, a convention center, and even the swimming pool at the local YMCA. The system serves a third of the downtown area, equivalent to more than 6 million square feet.

When Boise first installed its downtown heating system nearly four decades ago, “it was a pilot project,” Jon Gunnerson, the city’s geothermal coordinator, tells Next City. “Nobody knew how successful it was going to be.” Today, it is the most prominent and successful example of geothermal district heating in the country. “We’re heating the big buildings downtown, and we see a huge benefit of offsetting the energy that these large buildings would use,” Gunnerson says.

Geothermal energy harnesses the heat stored in rocks underneath the Earth’s surface. The Earth’s inner core is about 10000 degrees Fahrenheit — about as hot as the surface of the Sun — but even a few miles below the surface, temperatures can soar to well above 200 F. A fraction of this heat would be enough to satisfy the world’s energy needs. Although other renewable sources of energy, like wind and solar, have garnered more attention, geothermal energy has an important advantage over them. While solar and wind energy ebb and flow with the conditions, the Earth’s heat doesn’t fluctuate. “It’s always on, always available. It’s a 24/7 resource,” says Amanda Kolker, a geothermal geologist at the National Renewable Energy Laboratory.

Although geothermal energy can be used to generate electricity, Kolker says that it holds more promise for “direct use,” especially district heating. Geothermal electric plants require extremely high temperatures, but district heating systems like Boise’s need only what the geothermal industry calls “low temperature” heat, which is anything below about 300 F. “The distance to [these temperatures], it’s not far; we’re talking a couple of miles deep,” says Gunnerson.

Boise, for example, has dug three wells, ranging from 400 to 800 feet in depth, to capture water from the aquifer. The water, which has been heated by radioactive rock decay in foothills northeast of the city, is approximately 175 F. Once the water flows through the wells, it is piped to the downtown area, and the buildings connected to the heating system extract about 50 degrees F of heat from the water. Afterwards, the water is injected back into the aquifer, where it is reheated and can later be collected again.

“One thing that always surprises people who come and take a look at our system is the simplicity of it,” Gunnerson says. “Our geothermal program isn’t much more than a sophisticated irrigation system. We just have a small well, and we’ve got a small pump on it. It doesn’t take much energy. It pumps the water out of the ground and runs it through a network of pipes. And we have another pump that’s a little bit larger that injects this water back into the aquifer.”

Boise’s system is entirely renewable. It requires no fossil fuels, and because the water is constantly recycled in the aquifer, the system sustains itself. It is also relatively cheap to operate. Gunnerson says that his annual budget to heat all the buildings is about $750,000. Boise can also connect more buildings without much added cost.

“We’re limiting carbon emissions, we’re providing a sustainable energy, long-term,” Gunnerson says. “We’re also providing local energy, something that doesn’t have to be outsourced from overseas or a long-distance away.”

That’s not to say that it was simple for Boise to install its heating system in the 1980s. At the time, the downtown area had already been developed, so the city had to open up streets and lay down new pipelines to connect buildings to the new heating system. But Gunnerson says that the Boise community was “supportive” of the initiative.

Geothermal district heating could play an important role in the nation’s transition to clean energy. Heating and cooling for commercial and residential buildings accounts for approximately a quarter of all energy consumption in the United States. Much of this energy currently comes from fossil fuels like natural gas, fuel oil, kerosene, or propane.

Currently, there are only 23 geothermal district heating systems in America. These existing systems depend on “hydrothermal” sources, which are naturally occurring sources of hot water below the Earth’s surface that are easily accessible, as in Boise. But hydrothermal sources are mainly found in the western United States and near low-population areas. Boise is one of the few places where a hydrothermal source can be found close to a major city.

But experts believe that, with some technological innovation, low-temperature geothermal energy can be accessed almost anywhere in the country. “It’s possible in most places,” says Maria Richards, the Geothermal Lab Coordinator at Southern Methodist University. “It’s just a question of how deep [underneath the surface] do you need to go.”

In 2019, the Department of Energy released a study in which it found that there is enough geothermal energy at relatively shallow depths — less than two miles or so —around the country “to heat every U.S. home and commercial building for at least 8,500 years.” The report concluded that by 2050, there could potentially be 17,500 geothermal district heating systems in America, serving nearly 50 million households.

The government, universities, and industry are all racing to develop new technologies to access this energy. One such technology is called “enhanced geothermal systems” or EGS. According to Kolker, EGS “proposes to create a reservoir where there isn’t any.” Water is injected below the surface to create a reservoir in rocks that store heat. Once the water is heated by the rocks, it is brought back to the surface and the heat is extracted. The Department of Energy has a field laboratory in Utah where it is testing EGS for commercial use.

Another technology is called a “closed loop,” in which a fluid is injected into a pipe or wellbore that travels deep underneath the ground. Unlike with EGS, the fluid never comes into contact with hot rocks. Instead, as the water moves underneath the surface, it absorbs the heat from the rocks.

“I think the technologies are going to start proving themselves so that we can harness this geothermal energy anywhere,” says Gunnerson.

If these technologies can be successfully deployed, Boise may no longer be the lone example of urban geothermal district heating. Based on the confluence of heating demand and the availability of geothermal resources, the Department of Energy’s data suggests that district heating could be viable by 2050 in several major urban and suburban areas, including Chicago, Boston, Houston, Los Angeles, Dallas, New York, and Philadelphia. “I do think the big cities are where it needs to be targeted,” says Gunnerson. “You get more bang for your buck to heat a downtown, high density, high population area.”

Aside from the technology, the biggest obstacle to the expansion of geothermal heating is money. Kolker says that “geothermal can be a risky investment because you can drill some geothermal wells and you might be successful, you might not, but in the meantime you’ve sunk all these costs into the drilling of the well.” The upfront costs for drilling geothermal wells and installing heating systems are steep, and it can take time to recover those costs. Richards noted that production from oil & gas wells can pay off their upfront costs in a few years, “whereas in geothermal, you drill a well and you amortize that cost over 10 to 20 years.”

Government assistance could go a long way in allowing the geothermal industry to reach the ambitious goals set by the Department of Energy. The experts I spoke with mentioned several programs that might be helpful, including tax incentives for drilling, risk insurance, research & development, or even a carbon tax to even the playing field against cheap fossil-fuel alternatives like natural gas.

“Unfortunately, there’s not a lot of government horsepower to incentivize this,” says Gunnerson. “The political side needs to step up and needs to encourage use of this. That would be a huge game changer.”

This story is part of the SoJo Exchange from the Solutions Journalism Network, a nonprofit organization dedicated to rigorous reporting about responses to social problems. It was originally published by Next City on June 3rd, 2021. 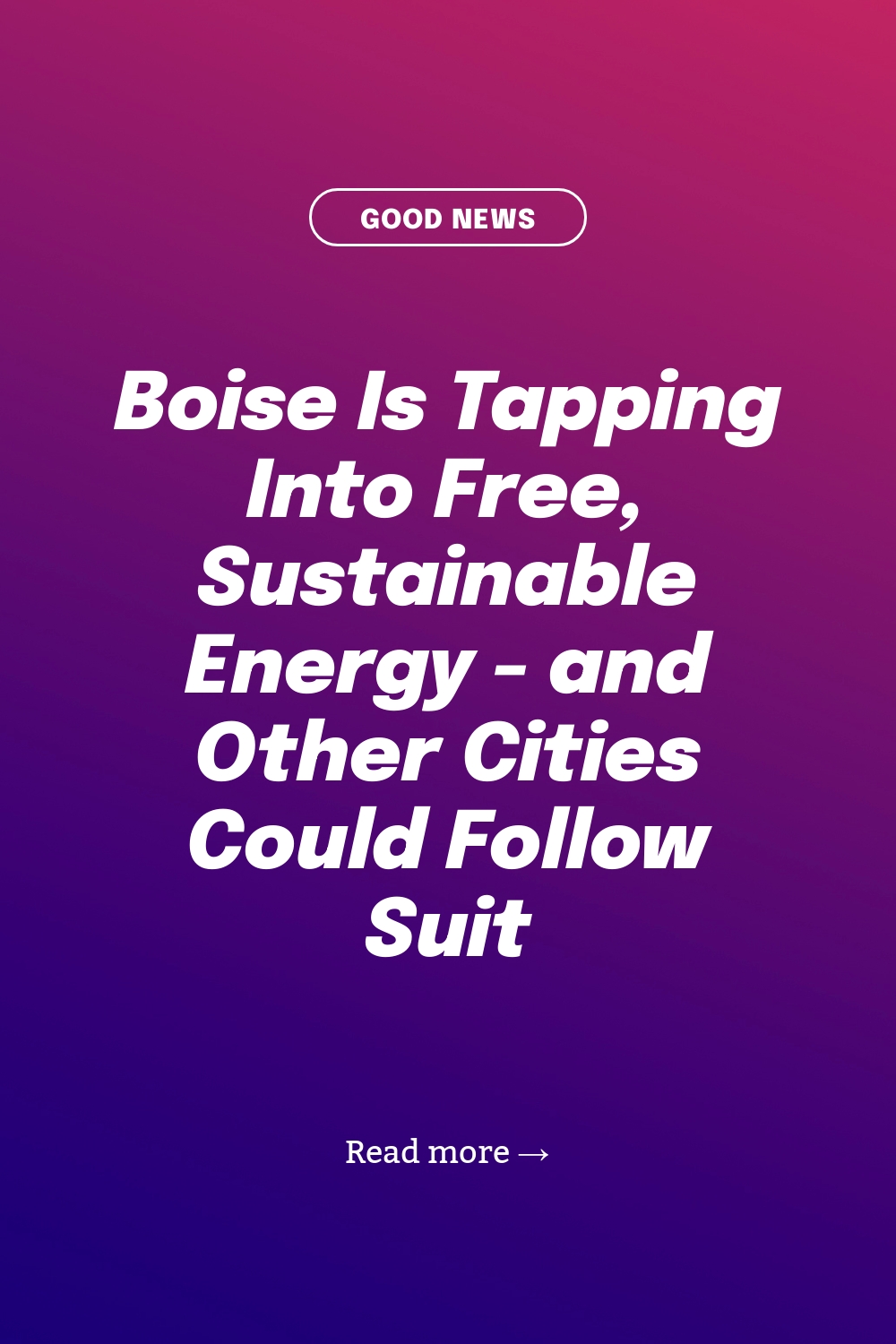 Combatting an Invisible Killer: New WHO Air Pollution Guidelines Could Save Millions of Lives

The disparities in air pollution exposure are often linked to structural racism, such as historic redlining and locating polluting industries and freeways in low-income or predominantly Black or Hispanic neighborhoods. The result shows up in the communities’ health.

Climate change is consistently being left out of relevant reporting about climate change-caused disasters like hurricanes, wildfires, and flooding. We put together a guide on how to contact local and national media — and what to say to encourage them to change their reporting.
No items found.