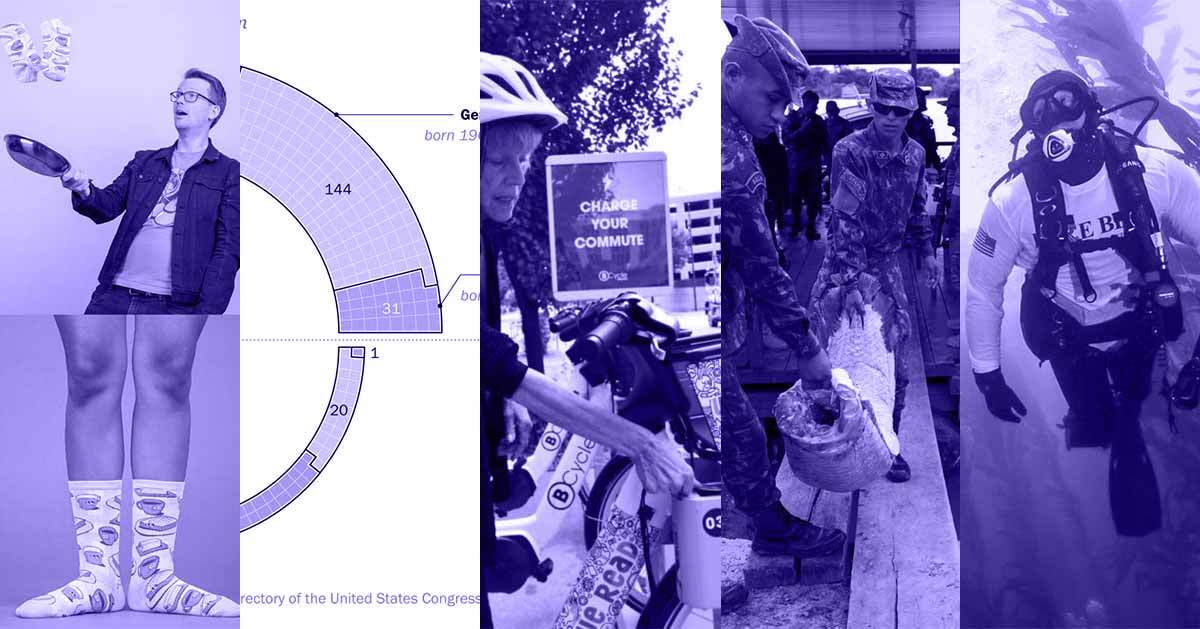 Since 2019, Hank and John Green, along with their fanbase, have been committed to raising at least $25,000,000 to support the construction, staffing, and supplying of a new hospital in the Kono District of Sierra Leone. They’re reaching this goal through a number of projects — one of them is a sock subscription service.

Now entering its third year, the Awesome Socks Club has grown to over 40,000 subscribers and has surpassed the million-dollar threshold each year. Just as it was always intended, 100% of this money has gone to charity.

Each month’s socks feature a new design by an independent artist, which is a secret to subscribers until their monthly sock shipment arrives, and are high quality and created with garment workers and the planet in mind.

Since New Zealand first did in 1893, countries all around the world have been granting women the right to vote

There’s no doubt the women's rights movement is alive and well today. And though there is still much progress to be made, from equal pay to reproductive rights, it’s important to look back to see how far we’ve come. And with Election Day tomorrow, one key area of progress to celebrate has been women’s suffrage.

More recently, Saudi Arabian women were granted the right to vote in 2011, when King Abdullah issued a decree ordering that women be allowed to stand as candidates and vote in municipal elections. And as of 2021, 20% of the parliamentary seats in Saudi Arabia were held by women.

→ 50 countries that gave women the right to vote

Millennials are significantly underrepresented in U.S. government — but change is coming

Increased millennial representation in politics is vital for increased diversity in all political arenas, as well as a means to maintaining a truly representative democracy.

In addition to millennial and Gen Z voters making up a larger percentage of the voting population, boot camps and organizations like Run For Something are helping improve generational representation ratios by recruiting and supporting young, diverse candidates.

A number of barriers keep cities from developing inclusive, thriving biking communities, like unequal distribution of infrastructure, car traffic, storage space, and cost. And while bike-share programs can help bridge the gap, people without a bank account can’t use them.

Thankfully, there’s a growing movement of bike libraries across the U.S., and while they all work differently, they share the same goal: increasing free access to bikes.

Of many incredible services libraries offer, these programs are part of a larger movement toward making cities more bike-friendly and communities helping provide repairs.

Thanks to a collaboration between Indigenous and settler communities, a giant Amazon rainforest fish made a comeback

The pirarucu, also known as arapaima fish can weigh up to 440 pounds, by far the largest of 2,300 known fish species in the Amazon. It’s also a staple food source for the Deni Indigenous people but was nearly driven to extinction by illegal and unsustainable net fishing.

Now, the pirarucu is thriving again, thanks to a partnership between settler communities, which are able to utilize the forest’s resources up to protected areas, and Indigenous peoples. The groups work together to sustainably fish and manage the pirarucu.

Amazon rainforest experts say the collaboration is unlike anything they’ve seen in the region and is an example to all of us of how we can come together to protect and conserve the planet and its resources.

For veterans of combat diving, life after the military can lack a sense of purpose. Now a nonprofit is giving these military veterans a new mission by employing their unique underwater skills to restore ocean health.

Veterans of combat diving are used to mission-focused work, so transitioning back to civilian life and working at a desk can be a difficult adjustment for many veterans.

Enter Force Blue, a nonprofit that unites military veterans with the world of coral reef conservation for the betterment of both.

According to the Department of Defense, one in five veterans of the Iraq and Afghanistan wars are diagnosed with post-traumatic stress disorder. Richard Casper is one of those soldiers.

Within his first four months in Afghanistan, Casper’s Humvee was struck by improvised explosive devices. His friend was killed by a sniper during the ambush, and Casper suffered a traumatic brain injury.

Coming home, he struggled with depression and suicidal ideation, but he found the healing power of art and music — and co-founded an organization called CreatiVets to help other veterans who are suffering.

Casper’s art and work with CreatiVets has caught the attention of TIME Magazine, the iconic School of the Art Institute of Chicago, and prominent country music artists, and he even spent time with President George W. Bush to discuss the impact music and art have had on his recovery.

President Biden just signed an international climate treaty that was first passed the Senate with bipartisan support. If fully implemented, the Kigali Amendment will avert upward of 0.5 degrees Celsius of warming by the end of the century.

Sesame Street now has its first-ever Latino executive producer. Sal Perez started working on Sesame Street 16 years ago as a production coordinator and will now oversee all production for the show’s 53rd season.

Lena Horne just became the first Black woman to have a Broadway theater named after her. Horne passed away in 2010 and was an actress, singer, dancer, and civil rights activist who notably took part in the 1963 March on Washington.

A South Carolina community came together to defeat a proposed LGBTQ+ book ban at their local library. The city council voted 9-3 to keep LGBTQ+ books accessible at the library.

A veterans group launched a campaign to recruit 100,000 veterans to help fill an election worker shortage. Vet the Vote partnered with Power the Polls specifically for the midterms, but anticipate their efforts will continue in future elections.

A Nevada county is working to ban the sale of cats, dogs, and other pets in pet stores. The county commission’s move comes in response to support from animal welfare advocates, businesses, and local shelters being overwhelmed with adoptable pets.

Maxwell Frost just made history as the first member of Gen Z in Congress. Frost made gun violence a centerpoint of his campaign and secured representation for the growing generation of new voters.

The U.S. Fish and Wildlife Service made Emperor Penguins a protected species. They said it “reflects the growing extinction crisis” due to the impact of climate change on sea-ice habitats.

Germany and Norway announced they want to revive their fund to help Brazil protect the Amazon rainforest. The countries first set up the fund in 2008 but stopped making payments to it after the previous president weakened protection measures.

The European Union approved a law that will effectively ban sales of new petrol and diesel cars starting in 2035. The deal also increased the required emissions reduction percent for new cars sold beginning in 2030, from 37.5% to 55%.

Veterans and military retirees will get an 8.7% cost-of-living adjustment added to their disability compensation. The largest increase in 40 years, it is equal to the Social Security increase.