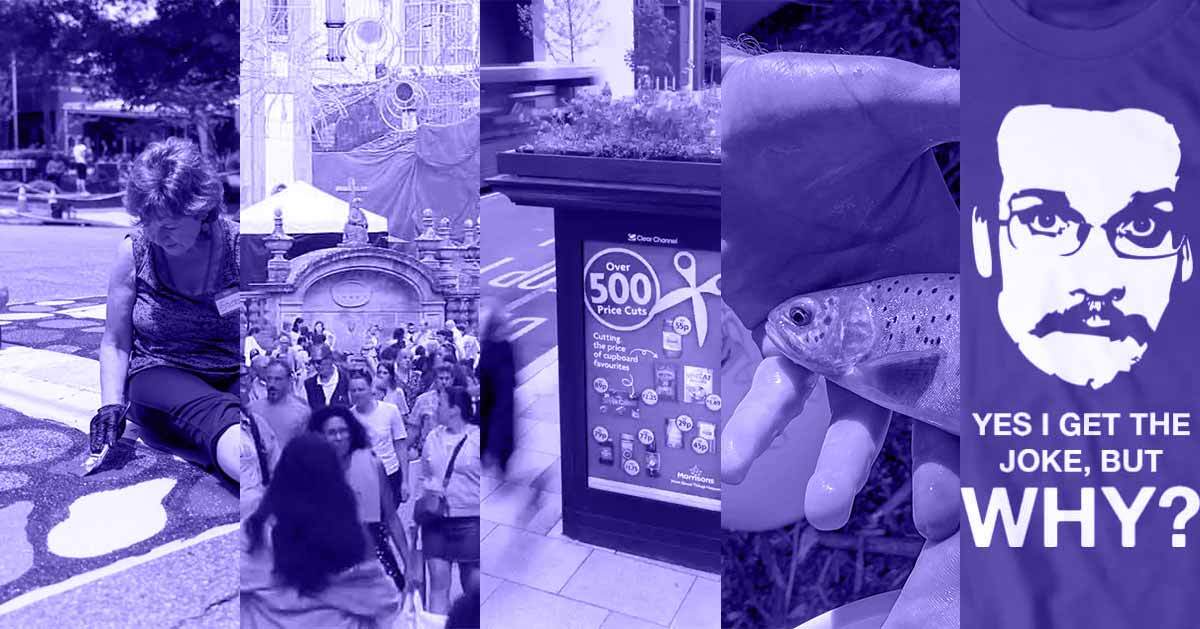 According to various studies, only between five and fifteen percent of drivers slow down at pedestrian crossings. In 2021, deaths from traffic accidents reached a 16-year-high, and the risk for pedestrians keeps rising, too, with an unprecedented year-on-year rise in deaths.

A documentary filmmaker looked into why this was happening, and found the biggest culprit wasn’t distracted driving — it was speed and visibility. White lines painted on asphalt weren’t solving either of those issues, but color might.

The Asphalt Art Initiative provides grants to create art to modify dangerous streets, like in Chattanooga, Tennessee, where artists and residents recently transformed a high-traffic area with street murals and crosswalk art.

There are more cancer survivors in the U.S. than ever before

Cancer death rates in the U.S. have been steadily declining for years, dropping 32% between 1991 and 2019 — especially dramatically in more recent years. There are now more than 18 million cancer survivors in the U.S. — up from just 3 million in 1971.

The American Association for Cancer Research credits improvements in treatments, diagnosing the disease, and prevention strategies.

The use of immunotherapies to treat cancer, as well as more development in drugs that target DNA mutations have helped improve treatment courses. Additionally, programs to screen regularly for common cancers like breast, colon, cervical, and prostate cancer have resulted in more early diagnoses — when it’s easiest to treat.

As we continue to fight for improvements in equitable access to treatment and diagnoses for marginalized communities, this is really good progress to celebrate.

Once in decline, a city in Spain prioritized pedestrians and small businesses grew

Officials in Pontevedra, Spain have spent two decades redesigning the city so that it’s easy, safe, and enjoyable for its 80,000-some residents to walk — not drive. Cars are allowed in very few places in the city, and even where they are, the speed limit is extremely low.

Not only has it led to a much higher quality of life for residents, but no pedestrians have been killed in a traffic accident in over a decade. It’s also been great for small businesses: there’s been a 7% increase in new restaurants and shops opening up.

The city has done so well, it was at one point named the most comfortable city in Europe to live in. It's also another instance of cities taking action to make cars less of a city centerpiece by prioritizing the safety and walkability of their cities for pedestrians.

Cities in the U.K. are turning bus stop roofs into gardens for bees and butterflies

Atop bus shelter roofs, cities are growing miniature gardens filled with pollinator-friendly plants like wild strawberries, poppies, and pansies. The number of these “bee bus stops” across the United Kingdom is set to grow by 50% by the end of the year.

The bus stops have to be specially designed to accommodate the weight of the soil, especially when it rains, so the company in charge of them is installing them as bus stops need replacing.

In addition to providing much-needed, welcoming habitats for pollinators in the city, these bus stops help offset urban heat — even if only a small amount.

Once believed to be extinct, Colorado’s state fish is now reproducing naturally

Colorado’s state fish, the greenback cutthroat trout was first listed as extinct by federal officials in the 1930s. Though small groups of them were found in parts of the state over the years, they turned out to be subspecies of the trout.

Then in 2012, after researchers found a small purebred population of the fish, they immediately implemented a hatchery to grow and maintain the species. And their efforts have now resulted in the species naturally reproducing in Colorado's native waters.

“This is just another affirmation that our conservation practices work and that we can save species on the brink,” Kevin Rogers, an aquatics researcher for Colorado Parks and Wildlife, told Colorado Public Radio.

It started with a bad mustache, became a piece of viral fan art, and has now been a community tradition for more than a decade. Pizzamas is an annual internet holiday celebrated by internet creators and authors Hank and John Green.

Created organically with their fanbase, known as Nerdfighters, the two-week event is equal parts fundraiser and celebration of community. Each year, Hank and John partner with independent artists to design and sell a variety of limited-edition merchandise.

All of the profits from Pizzamas merchandise are donated to charity, and in recent years it’s contributed to the millions that have been donated to Nerdfighteria’s ongoing project with Partners in Health — a maternal health center in Sierra Leone.

Four years ago, Abe Ndege got off the bus from his first day of kindergarten and told his mom Ricki Weisberg, “Terrible sandwich, by the way.” She caught the honest moment on camera and shares it every year on social media to mark the beginning of the school year.

This year, she shared it on TikTok — and as TikTok does, it quickly went viral. It has more than 15 million views, and the now 10-year-old Ndege started getting recognized at school, too. Wanting to turn the newfound attention on to others, the two launched a website to raise money to fight childhood hunger through Feeding America.

"It's a cause that's close to our hearts. And we wanted to use this little moment in the spotlight to give back and try to do some good,” Weisberg said.

A guaranteed income program is providing support and healing for Black residents in Portland. The Black Resilience Fund is awarding about 50 Black Portlanders up to $2,000 a month for the next three years.

Connecticut will be one of the first states to require schools to teach about climate change science. A new law says public schools must integrate lessons on human-caused climate change into their science curriculum starting in July 2023.

An Iraqi software engineer started a Tigris River cleanup project that draws hundreds of volunteers. He believes it could help drive positive change for both the environment and transform the image many people have of Iraq.

Cuba has officially legalized same-sex marriage. Cubans voted in favor of the new family code, which also allows LGBTQ+ couples to adopt, and extends greater protections to women, children, and the elderly.

India developed a new cervical cancer vaccine that’s 87% less expensive and highly effective. Cervical cancer is the fourth most common cancer among women globally, and about 90% of new cases and deaths worldwide occurred in low- and middle-income countries in 2020.

A nonprofit is helping bring free tutoring to children experiencing homelessness. School on Wheels began in 1993 when its founder started tutoring kids living in shelters in Los Angeles.

John Cena just set the record for the most wishes granted through the Make-A-Wish Foundation. The WWE superstar has granted 650 wishes.

For the first time in 28 years, people in prison will be eligible for federal grants for higher education. While the rising cost of education still needs to be addressed, this is a positive, hopeful change for those who are incarcerated.

A veterinarian writes children’s books that break stereotypes about the medical profession. In her “Real Doctor” book series, Dr. Cherice Roth uses humor and furry friends to talk about representation.

A Colorado man started building benches for bus stops without them. James Warren makes the benches out of scrap wood, writes “Be Kind” on them, and hopes it helps make riding the bus a little easier.

Two Finnish engineers figured out how to use sand to store wind and solar energy. Their battery can supply power year-round and has already been hooked up to a commercial power station in Finland.

Decades after the last major policy to address food insecurity, the White House has renewed its commitment to ending hunger. The Biden Administration is investing in five key areas, like improving food access and affordability and enhancing nutrition and food security research.

A U.K. man set up collaborative woodworking sheds to help combat loneliness in his hometown. Philip Jackson hosts meetups once a week for people in the community to come together and woodwork.

Amidst worsening wildfires, a pilot program in California is recruiting and training women to become firefighters. The Yosemite Women’s Fire Internship at Yosemite National Park is addressing both the shortage of firefighters and equity in the profession.