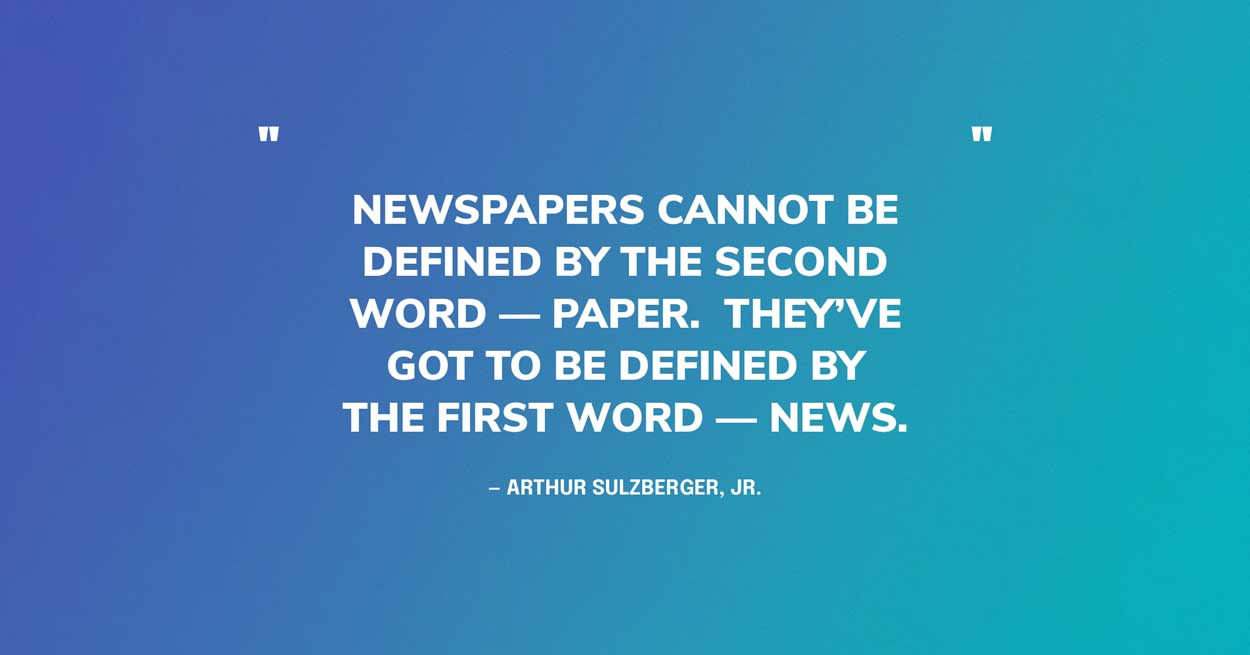 We fell in love with newspapers in 2017. We launched the Goodnewspaper (a print newspaper filled with good news) right as the rest of the news industry was scaling back its print operations in favor of a more digital approach.

It was a bold risk for our small team. Good news already had a poor track record, with readership numbers always dragging far behind traditional (non-solutions-focused) news. And as the only millennial-run print publication to launch in the United States, it would have been valid to question whether we had any idea what we were doing.

We launched a successful Kickstarter campaign to fund our first print run and we had our debut edition arriving on doorsteps around the world by the end of the year.

More than five years later, we're still producing a beautiful monthly Goodnewspaper filled with hopeful stories, art, and guides on how to take action and make a difference.

While we love sharing articles and resources online (especially our Instagram, newsletter, and this very website) we've created a special connection with our print readers and feel incredibly proud of what we're able to create with newsprint and ink.

We think there's something special about physically holding and reading a print newspaper. The fact that you somehow came across this article tells us that you might feel the same way.

Over the last few years, we've slowly collected the best quotes about newspapers (and sometimes the news) and we're publishing them here today. Some quotes celebrate newspapers and some take a critical perspective. We hope you find these quotes helpful and insightful. And we also hope you'll try our Goodnewspaper. We've worked hard to make it helpful, affordable, and something you'll be proud to gift as well. Try a (risk-free) subscription today.

“Were it left to me to decide if we should have a government without newspapers, or newspapers without a government, I should not hesitate a moment to prefer the latter.”
— Thomas Jefferson

“A good newspaper is a nation talking to itself.”
— Arthur Miller

“Most of us probably feel we couldn’t be free without newspapers, and that is the real reason we want newspapers to be free.”
— Edward R. Murrow

“Every time a newspaper dies, even a bad one, the country moves a little closer to authoritarianism…”
— Richard Kluger

“I don't believe newspaper reporters can substitute for a district attorney, but a newspaper has a very valid investigative role. Newspaper reports on corruption in government, racketeering and organized crime conditions can be very helpful to your communities and the whole country.”
— Robert Kennedy

“It is usually known that newspapers do not say the truth, but it is also known that they cannot tell whoppers.”
— George Orwell

“People don’t actually read newspapers.  They step into them every morning like a hot bath.”
— Marshall McLuhan

“I’d love to rise from the grave every ten years or so and go buy a few newspapers.”
— Luis Bunuel

“Newspapers are tutors as well as informers.”
— Neil Kinnock

“The newspaper is a greater treasure to the people than uncounted millions of gold.”
— Henry Ward Beecher

“What a newspaper needs in its news, in its headlines, and on its editorial page is terseness, humor, descriptive power, satire, originality, good literary style, clever condensation, and accuracy, accuracy, accuracy!”
— Joseph Pulitzer

Quotes Critiquing Toxicity in the News

“Read not the Times, read the Eternities.”
— Thoreau Henry David

“To look at the paper is to raise a seashell to one's ear and to be overwhelmed by the roar of humanity.”
— Alain de Botton, The Pleasures and Sorrows of Work

“Newspapers are a bad habit, the reading equivalent of junk food. What happens to me is that I seize upon an issue in the news — the issue is the moral/philosophical, political/intellectual equivalent of a cheeseburger with everything on it; but for the duration of my interest in it, all my other interests are consumed by it, and whatever appetites and capacities I may have had for detachment and reflection are suddenly subordinate to this cheeseburger in my life! I offer this as self-criticism; but what it means to be "political" is that you welcome these obsessions with cheeseburgers — at great cost to the rest of your life.”
— John Irving

“If the newspapers begin to publish stories about wars, and the people begin to think and talk of war in their daily conversations, they soon find themselves at war. People get that which their minds dwell upon, and this applies to a group or community or a nation of people, the same as to an individual”
― Andrew Carnegie

“Newspapers are horror happening to other people.”
— Nadine Gordimer

“Good newspapers believe in giving a balanced view of the world. Fine. Some people then exploit that belief and use it to balance truth with falsehood.”
— Nick Davies

“Newspaper: A device unable to distinguish between a bicycle accident and the collapse of civilization.”
— George Bernard Shaw

“Newspapers abound, and though they have endured decades of decline in readership and influence, they can still form impressive piles if no one takes them out to the trash.”
— Jon Stewart

“It’s amazing that the amount of news that happens in the world every day always just exactly fits the newspaper.”
— Jerry Seinfeld

“We read the weird tales in newspapers to crowd out the even weirder stuff inside us.”
— Alain de Botton

“Newspapers should be read for the study of facts. They should not be allowed to kill the habit of independent thinking.”
— Mahatma Gandhi

The Morning Paper by Mary Oliver:
“Read one newspaper daily (the morning edition
is the best
for by evening you now that you at least
have lived through another day)
and let the disasters, the unbelievable
yet approved decisions
soak in.
I don't need to name the countries,
ours among them.
What keeps us from falling down, our faces
to the ground; ashamed, ashamed?”
— Mary Oliver, A Thousand Mornings: Poems

“The best fiction is far more true than any journalism.”
― William Faulkner

“If anything, I get most upset because I wanna read a good paper first thing in the morning. And if I see a lie about myself flash across the front of the cover, I don't think much of the rest of the newspaper.”
— Angelina Jolie

“After one has been in prison, it is the small things that one appreciates: being able to take a walk whenever one wants, going into a shop and buying a newspaper, speaking or choosing to remain silent. The simple act of being able to control one's person.”
— Nelson Mandela

“A newspaper is a mirror reflecting the public, a mirror more or less defective, but still a mirror.”
— Arthur Brisbane 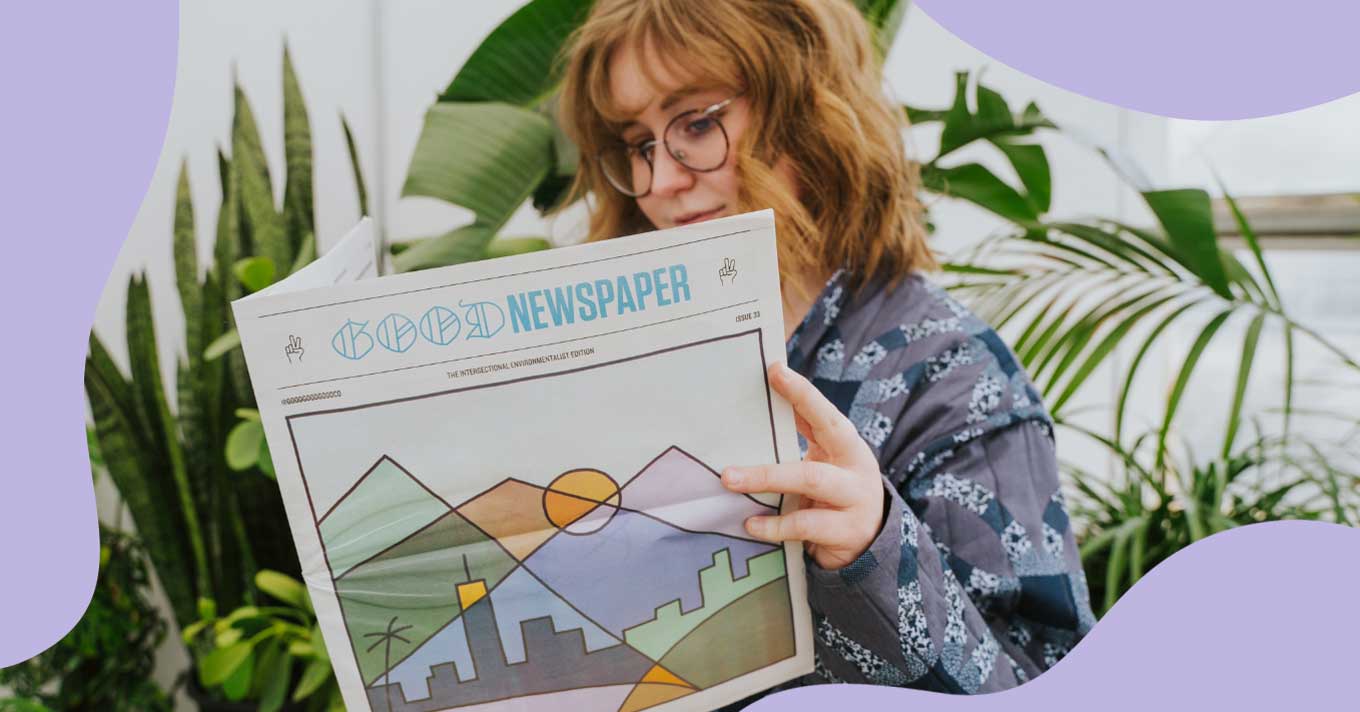 How To Read The News With Intentionality

We are inundated with news every day, and it can be hard to accurately and productively stay engaged. Let’s explore how we can think critically about our news consumption and set meaningful boundaries. 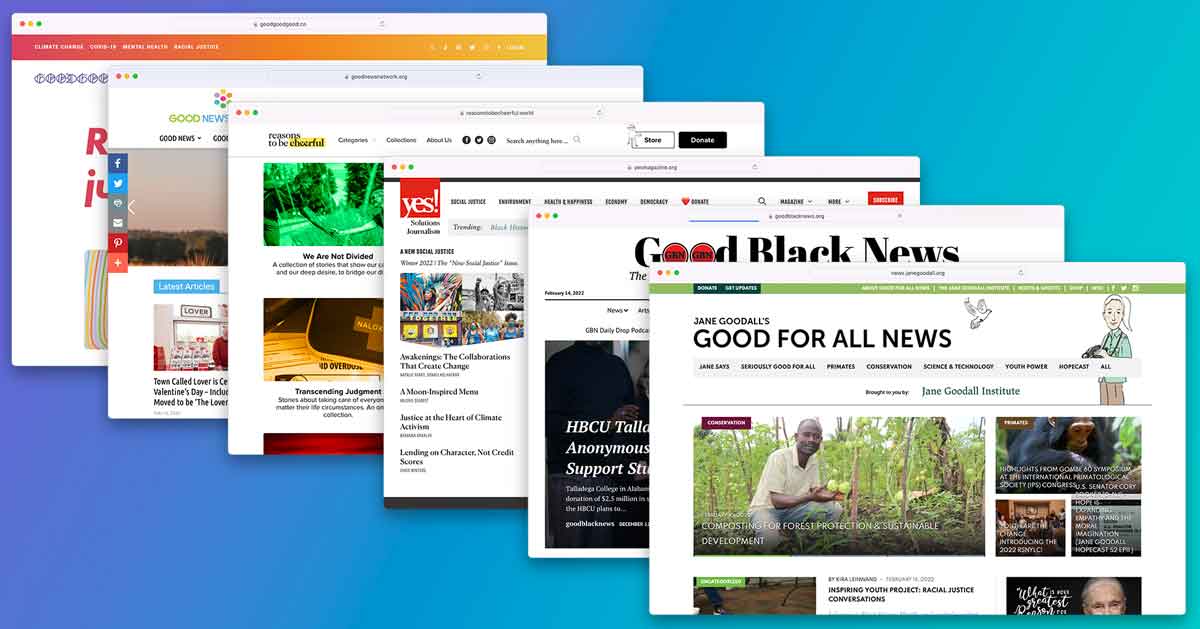 The Top 12 Good News Websites To Leave You More Hopeful