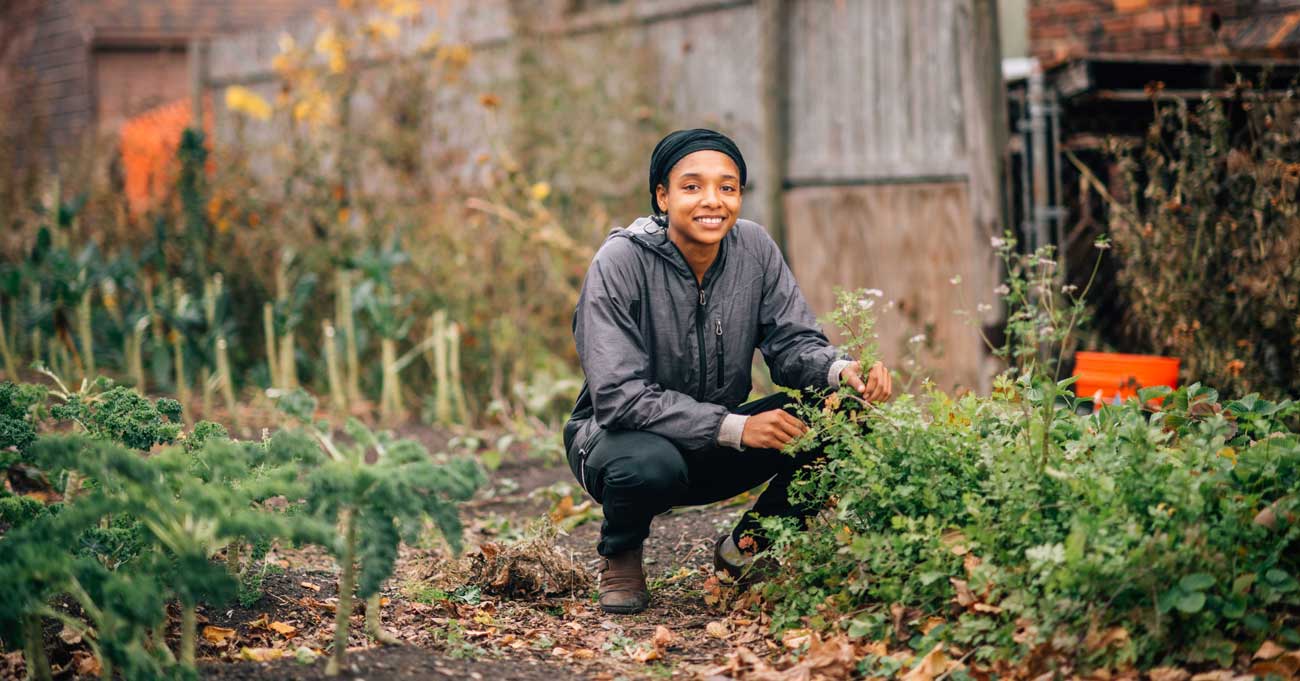 Now, a new land fund is opening the door to official ownership.

In the center of a residential neighborhood in Detroit, surrounded by empty lots and houses in disrepair, is an oasis of brightly colored flowers, tomatoes, okra, and other crops.

Ten years ago, this space was neglected, overgrown with high grass, just one of several city-owned, abandoned lots on Helen Street.

But the vacant land made one homeowner feel unsafe, so her great-great-nephew and his wife planted flowers and started taking care of the property.

The once-abandoned lot has since been transformed into a community garden, called Nurturing Our Seeds, that now stretches across several lots on the street.

It has become an anchor for the neighborhood, providing affordable and nutritious produce, hosting events, and reminding the community that people still live on Helen Street, despite the derelict homes, and that they still care.

But for the nearly decade that Cole and her husband tended the land, they never actually owned it.

After the couple inherited the great-great-aunt’s house, they inquired with the city about purchasing the lot next door. But they were told they didn’t qualify for Detroit’s side lot program because of taxes they owed on the house leftover from the aunt.

Cole and her husband later inquired about buying a different abandoned lot across the street, which used to belong to a family member. For years, the answer was, “‘We’re not selling it,’” Cole told Grist.

Then, she said, the land was suddenly announced up for auction. It hadn’t been offered to anyone that already lived in the neighborhood.

Finally last year, Cole and her husband were able to purchase the farmland, buying several lots with the help of the newly created Detroit Black Farmer Land Fund.

Created in 2020 by three long-time nonprofit organizations in Detroit, the fund aims to address the historical racial land ownership disparity that has affected Cole and Black farmers across the country.

"In the 1910s, Black farmers made up 15 percent of all farmers, compared to less than one percent today."

Black farmers, and Black-owned farmland, are at a historical low. In the 1910s, Black farmers made up 15 percent of all farmers, compared to less than one percent today.

But Detroit bucks that trend, at least in the number of farmers. The city, which is almost 80 percent Black, has more than 1,500 farms and community gardens — a large portion of which are run by Black farmers.

Many, however, do not own the land they cultivate.

And it’s not for lack of available space. It’s estimated that between 24 to 40 square miles of Detroit land is vacant, out of the city’s total 139 square miles.

In the 1950s, Detroit’s population peaked at nearly 2 million. But in the decades that followed, that number steadily declined due to deindustrialization and white flight to the suburbs — leaving behind abandoned houses and land. Today, less than 700,000 people remain in a city that was once the fifth-biggest in the United States.

Black farmers have long struggled with historic and ongoing racial discrimination that has prevented them from buying property, and passing it down, like many white farmers have done for generations.

In rural areas, those discriminatory practices occur within the U.S. Department of Agriculture.

Farmers in urban centers face a slightly different set of challenges: land sales prioritized to big developers and a lack of institutional knowledge and time to navigate the bureaucratic system.

The ongoing hidden barriers to property ownership are evident in the housing mortgage sector in Detroit. A year-long analysis of 2016 data by Reveal and the Associated Press found that Black applicants in Detroit were almost twice less likely to be approved for a mortgage loan than white applicants.

“The legacy of predatory lending practices keeps Black farmers and landowners dispossessed of their land,” said Jillian Hishaw, an agricultural law attorney and founder of F.A.R.M.S, a legal nonprofit that helps landowners keep their land for future generations.

"In the 1910s, Black farmers made up 15 percent of all farmers, compared to less than one percent today."

To address the land ownership issue, the Detroit Black Farmer Land Fund was created last year on Juneteenth, a holiday that marks the ending of slavery for African Americans in the U.S.

“It’s been liberating, in many ways,” Shakara Tyler, a co-creator of the fund, told Grist.

In its first year, the group selected 30 farmers to award money too, one of whom was Cole. Now, in its second year, the fund has raised almost $100,000 and will be able to support 40 Black farmers to buy land.

All of the money raised goes directly to awardees to buy land. The amount each farmer gets is determined by how much their land costs, and how many plots they want to purchase.

The Land Fund also helps with the technical parts of buying the property on an as needed basis, such as figuring out who owns the land and navigating the time-consuming bureaucratic process.

The Land Fund is supported by small donations from community members, as well as a few wealthy white donors that wanted to do reparations work, Rushdan told Grist.

"She grows squash and collard greens, among other crops, and is working with Raphael Wright, who plans to open the city’s first Black-owned grocery store, to provide produce directly to the store from her farm."

One of the beneficiaries of the program, Dazmonique Carr, owner of Deeply Rooted, a half-acre farm on the Eastside of Detroit, said the Land Fund helped her “step by step” in purchasing and expanding her property.

She grows squash and collard greens, among other crops, and is working with Raphael Wright, who plans to open the city’s first Black-owned grocery store, to provide produce directly to the store from her farm.

“It definitely feels autonomous,” she told Grist, “feeling like you can secure and protect the things that you’ve been working hard to maintain.” She has a son, whom she looks forward to passing the property down to in the future.

"Tracy Harris purchased two lots through the fund where she intends to grow food for local food pantries."

Also on the Eastside, long-time farmer Willie Patmon purchased land through the fund to double the size of his farm, to continue giving away produce and expand his free gardening program.

On the Westside of Detroit, Tracy Harris purchased two lots through the fund where she intends to grow food for local food pantries.

Rushdan told Grist that the city of Detroit unfairly prioritizes land for certain uses over others, like for big development projects. City officials and the Detroit Land Bank, a public authority created by the city and state that owns a quarter of Detroit properties, have been criticized over the years for who they sell land to, how difficult it can be to get property, and a lack of transparency about the process.

In the more than decade since the Detroit Land Bank was created it’s been wrought with criticism and complaints, from showing favoritism toward city officials, to threatening to seize houses it doesn’t own. There has also been outcry over which properties the Land Bank chooses to demolish. In a federal investigation into the city’s demolition program, several were charged with bid-rigging and bribes.

“Detroit is presented as this urban ag[ricultural] haven, the friendliest urban ag city in the country, and that the government is sort of shepherding it,” Tyler said. But it’s the grassroots organizations making that happen through initiatives like the Land Fund, not the government, she said.

“We’re literally alkalizing the little that we have into all of this abundance,” she said. “Imagine if we had support from the government.”

"Groups in Washtenaw County, Michigan, and in Philadelphia, Pennsylvania are trying to start funds and have reached out to the Detroit program for guidance and support. In New York, a similar model called the Black Farmer Fund was created."

More land funds are cropping up around the country to support Black farmers — and looking to the Detroit fund as a model, Tyler said.

Groups in Washtenaw County, Michigan, and in Philadelphia, Pennsylvania are trying to start funds and have reached out to the Detroit program for guidance and support. In New York, a similar model called the Black Farmer Fund was created.

​​”Funds like Detroit Black Farmer Land Fund and F.A.R.M.S. emergency funds are essential to combating the loss of land in the Black community,” said Hishaw.

Earlier this year Congress promised $4 billion to farmers of color for debt relief, grants, and education. Since the bill’s passage, however, there have been 13 lawsuits filed claiming reverse racism.

Now, it’s unclear if Black farmers will ever see the relief — highlighting the importance of local efforts to combat racial disparities in farming.

Cole told Grist that purchasing land with the help of the Land Fund was a big deal, because it meant avoiding jumping through hoops and a years-long drawn-out process.

“We’re feeding communities and we are building relationships to bring healthy food systems across Michigan,” she said.

“Owning the land is key. It allows people to keep those generational practices going. It’s something that after 10 years, the community is able to say, ‘we’re not going anywhere.’”

This story is part of the SoJo Exchange from the Solutions Journalism Network, a nonprofit organization dedicated to rigorous reporting about responses to social problems. It was originally published by Grist on October 26th, 2021.