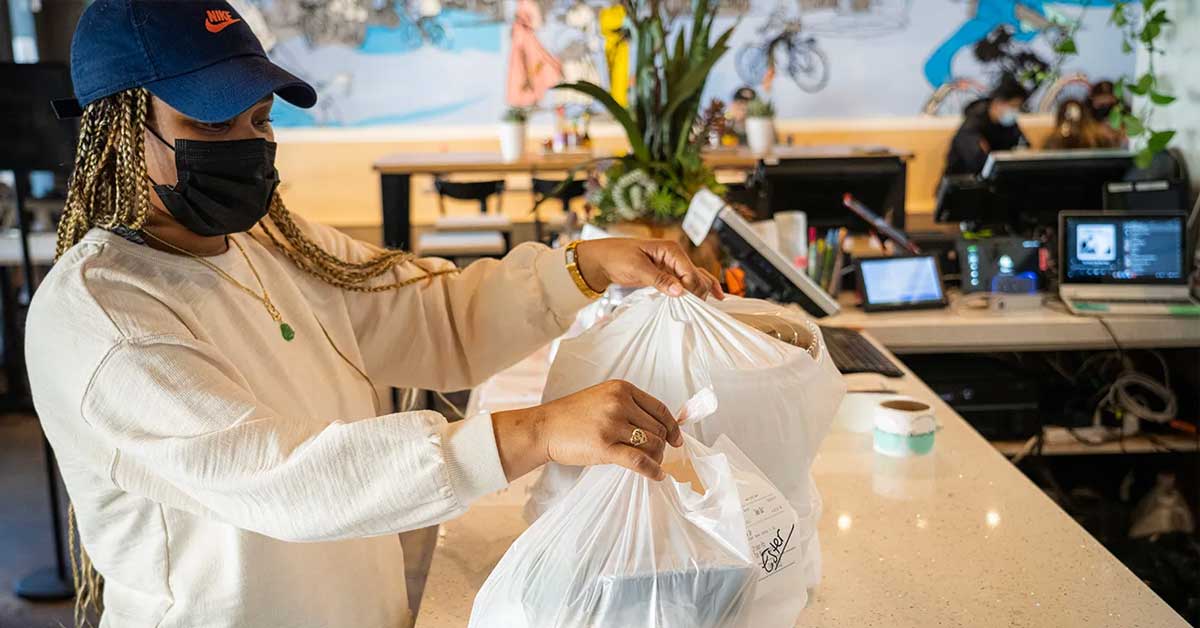 A tech startup has developed a way to bridge the nutrition gap for families, at least in the short term.

In May 2021, Chelsea Vasquez and her mother caught two metro buses from their Inglewood, California, home to St. John’s Well Child & Family Center clinic, where they had appointments to receive their first doses of the COVID-19 vaccine.

Vasquez’s stomach turned from hunger while in the waiting room. The clock was already approaching 1 p.m. and she hadn’t eaten all day—something she had become used to, but it didn’t make her hunger any less intense.

Vasquez, 17, is the youngest of three siblings in a household of four. Her mother, the family’s sole provider, works as a hotel housekeeper, but even with her income and access to dry goods from the local church pantry and food bank, it’s still hard to keep food in the fridge.

Vasquez says her mother had to take out payday loans with super-high interest rates just to buy essentials like milk and water, and when they shop, they’d catch the bus to the least expensive grocery store and load up on what seemed like a lifetime supply of instant ramen noodle soup.

Even though her family depends on ramen, Vasquez says the soups do more harm than good, especially since her mom and sister are diabetic.

“It’s like 50 cents for one cup of Ramen, but it’s like 300 calories in one cup,” Vasquez says. “We learn in school you need to have your veggies, your proteins, your meat, but [ramen noodles] have no source of vegetables, no source of protein, no source of healthy fats, or anything like that.”

Not knowing where her next healthy meal would come from each day had taken a toll on her, both socially and mentally.

At school, she was too embarrassed to chat with friends about food, and she found herself battling to stay focused in the classroom, which was problematic, because she has ambitions to attend college after graduation.

In the waiting room at St. John’s, a worker with Stop the Spread, an organization that helped local institutions like the St. John’s clinic support underserved neighborhoods hit hard by the pandemic, offered to enroll Vasquez’s family in Bento, a pilot health-intervention program that uses text messages to connect food-insecure people and families to prepaid groceries and full-balance meals. (Stop the Spread fulfilled its charter in December 2021 and ceased operations.)

According to Pew Research Center, 97% of all Americans now own a cell phone of some kind, and federal government assistance programs provide eligible low-income individuals with free phones and unlimited texting plans.

In addition, 38.3 million people lived in food-insecure households in 2020, according to the U.S. Department of Agriculture, while Feeding America, a hunger-relief organization, projected that number would jump to 42 million the following year (the final data for 2021 have not been released yet) as a result of the pandemic.

Research has also shown correlations between food insecurity and cardiometabolic diseases, such as heart disease, stroke, and Type 2 diabetes, and a 2019 study funded by the National Institutes of Health estimated that these diseases drive $50 billion a year in health care costs.

The first test market for what became Bento was in Texas in March 2020, when it was used to help the Boys & Girls Clubs of Greater Houston with the growing number of families and children in need of food due to pandemic-related job losses and school closures.

Now spun off into its own for-profit company, Bento sees eliminating food insecurity as a component of preventive health care.

“And if we’re dealing with a low-income population, that part of the health care system are Medicaid members, which is a taxpayer-supported program,” says company co-founder Adam Dole. “So, at the end of the day, this is a taxpayer issue that has never been thought of as a taxpayer issue.”

Bento’s text messaging software is integrated with other online ordering platforms, such as Postmates, allowing clients to order meals and groceries tailored to their dietary needs. That data is gathered, logged, and automated during enrollment in the program.

Bento plans to eventually sell its intervention program to the health care industry — especially health insurance companies — because they have the scale needed to improve the health of low-income, food-insecure populations as a whole, Dole says.

As the service rolls out in test markets, Dole says the company will be analyzing the health outcomes of Bento participants to gather more data. They expect to find that focusing on preventive health care results in lower costs for taxpayers and insurance plans that depend on public funding.

“One of the biggest misconceptions is that we have to be a nonprofit to address food insecurity,” Dole says. “We support nonprofits. We want them to exist, but we recognize that that alone isn’t going to solve the problem. There are not enough donations in our country to solve food insecurity.”

Stop the Spread was one of the first organizations to contract with Bento. English isn’t Vasquez’s mother’s native language, so the family enrolled in Bento using Vasquez’s cell phone.

For six months, the duration of the program, Vasquez says she received a text message from Bento every morning with a list of food options from about a dozen grocery stores and restaurants within walking distance of her home. She’d text back to order dinner for her family.

At the end of the school day, she’d throw on her headphones and zone out to Kim Petras and Lady Gaga as she strolled to the restaurant.

The restaurant staff would only see her as a regular customer; the app doesn’t reveal its participants to be part of a food-insecure program in order to maintain their dignity among Bento’s participants.

Not only did she feel healthier and more focused in the classroom, but she also felt less insecure around her friends, and, most important, she enjoyed spending more quality time with her family.

“I don’t know if this may be cheesy or something, but I noticed me and my family got to sit down and enjoy food together,” she says. “It just feels good knowing that you’re around family and you don’t have to be stressing out over food.”

Bento also works with other organizations to connect clients to additional resources. For example, Bento and Stop the Spread helped Vasquez’s family apply for support from the local public utility to pay their electricity bill.

Meal Nation started as an emergency crisis program to support foster youth college students and their dependents who were food- and housing-insecure when campuses closed at the start of the pandemic.

The program works with colleges across California to enroll students in Bento. A survey of Meal Nation recipients showed that 86% of the participating students said it helped them stay motivated and keep up with schoolwork.

In its own preliminary survey, Bento found that all its participants wanted to sign up for the program again.

The company was named one of Time magazine’s “Best Inventions of 2021,” finalists Fast Company’s “World Changing Ideas 2021,” and placed on Fortune’s “Impact 20.”

Who Gets Meals? How Many, and for How Long?

To date, Bento has served about 200,000 meals to 4,000 families in 10 cites through a couple dozen local social services organizations.

However, Bento meals must be picked up at the restaurant or store. Foster Nation has had to contract with a delivery company to serve students who live in rural areas or food deserts.

According to hunger-relief organization Feeding America, Native Americans, senior citizens, and those living in rural areas comprise a significant portion of the food-insecure population.

However, Bento is about to launch a pilot with the Detroit Area Agency on Aging, a nonprofit that serves older people, adults with disabilities, and caregivers.

In this program, the caregivers will deliver the meals for their clients, says Susan Schaffler, Bento’s director of strategic communications.

Vasquez says that even though her mother recently started working six days a week and is earning more money now, the time the family was enrolled in Bento gave her a little breathing room to save more, as the interest on those payday loans was continuing to compound.

Vasquez says there are good weeks and there are weeks where her family still survives off potatoes wrapped in fried tortilla shells and potato soup, which she says are stigmatized as “poor people’s food.”

“And now I’m back to ramen noodles,” she says. “I just think ramen is something that will always be a part of my life.”

At the height of the pandemic, Foster Nation provided its college students one meal a day for 90 days, but it has since scaled back to 30 days, using Bento as a short-term bridge to longer-term resources, such as CalFresh (California’s name for the federal SNAP program), which usually takes a month for approval.

Kinman says Foster Nation has paid about $100,000 to Bento since March 2020 to provide 13,500 meals to students in 57 different colleges and universities, which the organization funded through grants and crowdsourcing campaigns.

Foster Nation’s work is to help foster youth become self-sufficient, Kinman says. “[Bento] is a capital-intensive program, but we have been able to leverage and get foster youth way more resources, like mentorship and career readiness and life skills, because of this program. So, we see Bento as a program that’s worth it in the long run.”

Meanwhile, Vasquez is now preparing her college applications. Her first choice is California State University, Los Angeles, because of its criminal justice program, where she wants to study to become either a homicide detective or a forensic scientist. She is applying for scholarships to help her cover not only tuition, but also food costs.

“I wish I could have Bento with me in college,” she says.

Bento is working to develop its own partnerships with colleges, because not only college students coming out of foster care battle with food security, Schaffler says.

And the company is now branching out to work through health insurers, which would allow for longer-term support and reach more families. Bento plans to launch a pilot with Medicaid enrollees in Pennsylvania by late March.

“Those pilots [with the community organizations] have validated the product and given us the kind of data and evidence that allows us to achieve the kind of outcomes the health care systems are looking for,” Dole says.

Related: Read the best motivational quotes about hunger and feeding the poor

This story is part of the SoJo Exchange from the Solutions Journalism Network, a nonprofit organization dedicated to rigorous reporting about responses to social problems. It was originally published by Yes! Magazine. 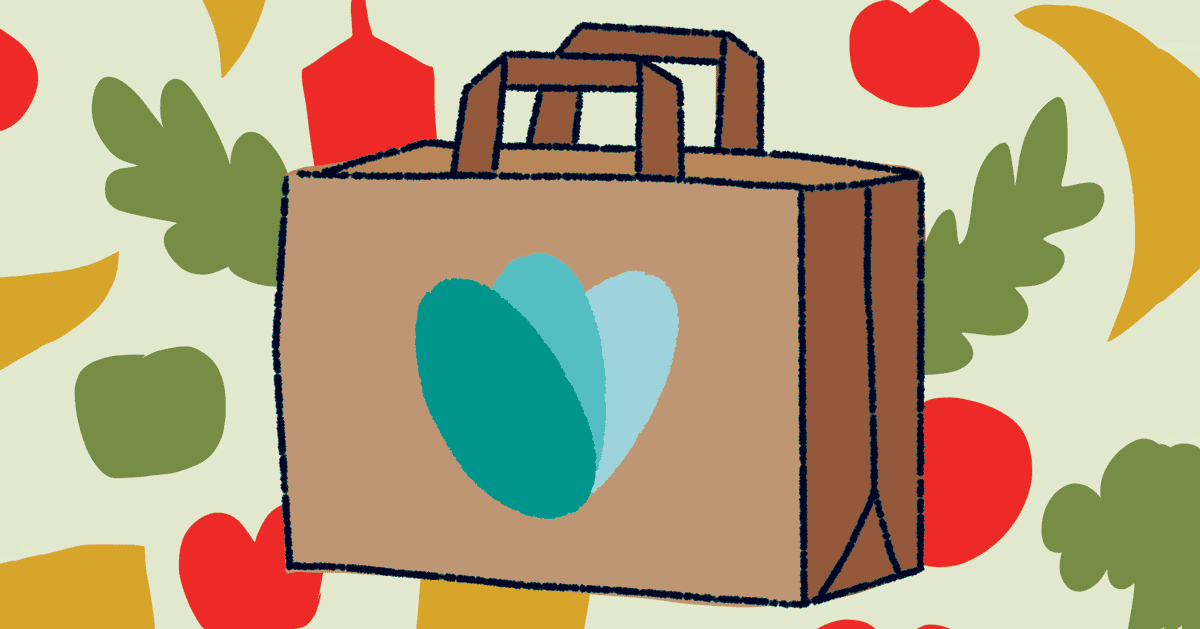 Too Good To Go: How Saving Food Can Help Save the Planet

One company has a creative solution to food waste and addresses both access and affordability of healthful foods plus the environmental impact of sending food to landfills.