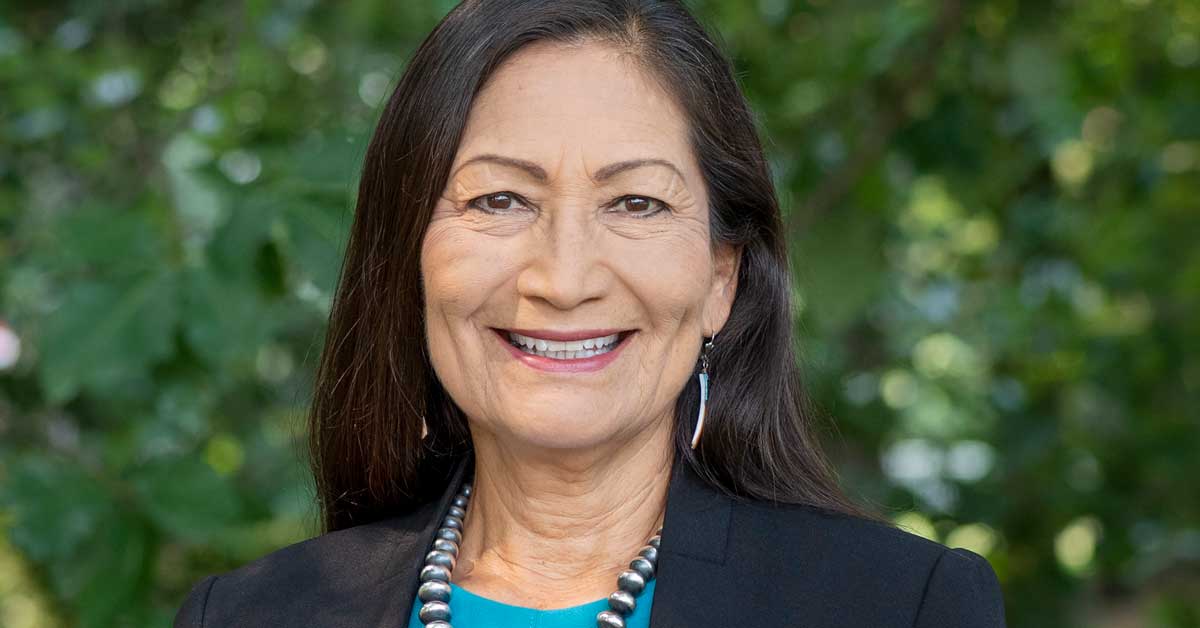 Deb Haaland, an enrolled member of the Laguna Pueblo, said she is 'proud to be in a position' to start with a term offensive to Indigenous women on 650 different places on federal land.

This article was originally published by The 19th.

Interior Secretary Deb Haaland announced Friday that the agency is establishing a task force to identify and remove derogatory terms used in the names of public land features such as valleys and lakes, beginning with the word “squaw.”

Haaland signed an order that identifies the word — an ethnic slur to describe Indigenous women — as derogatory and establishes a Derogatory Geographic Names Task Force to rename the 650 places on federal land that contain it.

A separate order creates an Advisory Committee on Reconciliation in Place Names, made up of history experts, members of the general public, and representatives from Indigenous communities, that will review and recommend changes to other derogatory words used as names on federal land.

“Our nation’s public lands and waters should be places to celebrate the outdoors and our shared cultural heritage, not to perpetuate the legacies of oppression. Indigenous people, and in particular women, know how offensive this word is, and I’m proud to be in a position to rid federal places of it,” Haaland said over the weekend in a visit to Alcatraz Island to mark the 52nd anniversary of its occupation by Indigenous activists.

Haaland is an enrolled member of the Laguna Pueblo and the first Native American to be a Cabinet secretary of an executive branch agency.

The Interior Department employs about 70,000 people who oversee more than 500 million acres of public land, including hundreds of national parks.

It contains the Bureau of Indian Affairs, which administers most programs related to more than 550 federally recognized tribes.

In 2018, before President Joe Biden tapped Haaland to lead Interior, she was one of the first two Native American women elected to Congress.

When Haaland was sworn in to represent New Mexico’s 1st Congressional District, she said that “Congress has never heard a voice like mine.”

In both roles, the Democrat has been outspoken about addressing human-caused climate change and what she has called an “epidemic” of missing and murdered Indigenous women.

The word “squaw” is believed to be a derivation of the Algonquian word for “woman,” but “the term has historically been used as an offensive ethnic, racial, and sexist slur, particularly for Indigenous women,” the Interior Department said.

The Interior Department has, in the past, identified other derogatory terms related to Black people and Japanese Americans that it no longer uses in naming places on public land.

Several states had already passed legislation prohibiting the use of the word “squaw” in names of public places, and federal legislation is pending in Congress that would prohibit the use of derogatory terms in public land names.

We’ve curated a collection of beautiful quotes about Black history, the Black experience, and Black History Month, by prominent figures in Black history as well as today’s activists, leaders, and creators.
No items found.