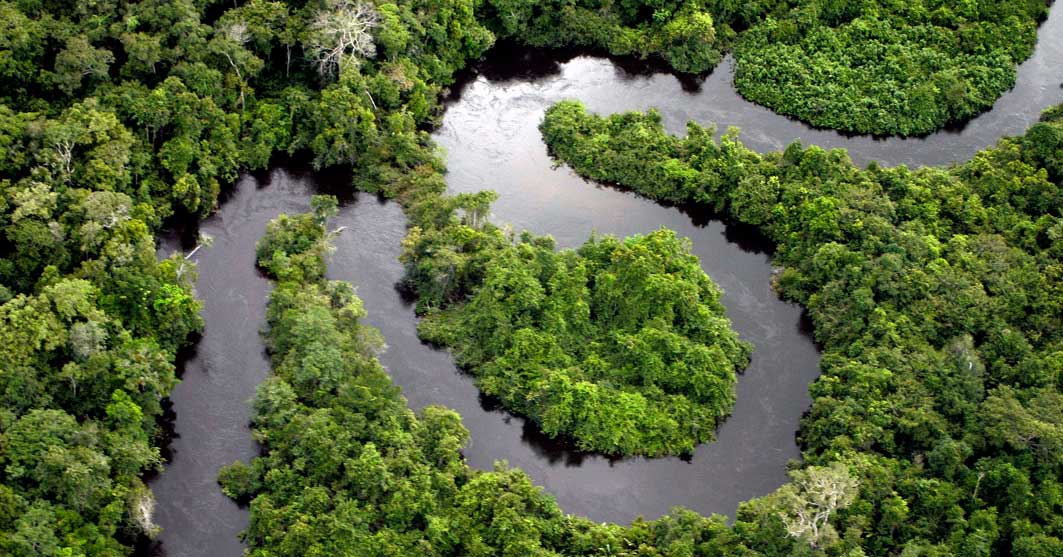 — A new plan called the Amazon Sacred Headwaters initiative proposes the protection of 80% of the Amazon in Peru and Ecuador by 2025, consisting of 35 million hectares (86 million acres) of rainforest.

— The proposal has received positive responses from Ecuadoran and Peruvian government officials, but faces a stumbling block in the fact that both countries rely heavily on extractive industries operating within the Amazon to help pay off foreign debt.

Pledges and solutions proposed by world leaders to address the climate and biodiversity crisis at the United Nations climate summit, COP26, and biodiversity conference, COP15, are not going to be enough, according to some Indigenous leaders in Peru and Ecuador.

A particular proposal that has been a target of criticism by Indigenous peoples and local communities (IPLCs) is a goal within the U.N.’s draft post-2020 global biodiversity framework, the 30 by 30 initiative.

The initiative aims to conserve 30% of Earth’s land and ocean by 2030 through protected areas in the hopes of providing a lifeline to struggling endangered species and conserving forest coverage to meet climate goals. Forests are thought to absorb one-third of global CO2 emissions per year.

Some leaders and academics have criticized the proposal to create more protected areas, as these have traditionally resulted in the displacement of IPLCs from their ancestral territories located within biodiversity hotspots.

According to one analysis, 250,000 individuals were displaced in 15 countries from 1990 to 2014 for the creation of protected areas.

But for Indigenous organizations in Peru and Ecuador, the main criticism of the goal to protect 30% of land and ocean is that it’s simply not enough to effectively avert the climate crisis. For these groups, most of the Amazon within these two countries is worth protecting.

“One of the key points that we must underline is that governments are considering protecting only 30% of the area that includes 35 million hectares [86 million acres] of land by 2030,” a spokesperson for Amazonian Indigenous leaders at COP26 told Mongabay in an email. “What [we] want to achieve is the protection of at least 80% by 2025.”

An alliance of Indigenous and nongovernmental organizations is proposing a bioregional plan, referred to as the Amazon Sacred Headwaters, to act as a model for future conservation efforts.

Consisting of the Amazonian Indigenous federations COICA, AIDESEP, and ORPIO, and a partnership with the Pachamama Alliance and Rainforest Foundation US, the initiative aims to permanently protect 80% of 35 million hectares of land.

This includes some 33 million hectares (82 million acres) of tropical rainforests near the Napo, Pastaza, and Marañon river basins of Ecuador and Peru that contain 3.8 billion metric tons of carbon. The goal is to declare the zone off-limits to extractive industries.

The logistics of the plan

Presented at COP26 last month, the alliance expects to prevent some 2 billion metric tons of greenhouse gas emissions into the atmosphere by halting deforestation, mining, and oil and gas extraction.

The plan aims at centering Indigenous land and resource rights, on the basis that Indigenous forest stewardship is among the most effective strategies in preventing deforestation and avoiding significant GHG emissions.

To protect the Sacred Headwaters, Indigenous leaders say they hope to finalize negotiations for land titles consisting of more than 8.9 million hectares (22 million acres) of Indigenous territories, while strengthening local autonomy over those areas.

The region is home to more than 30 Indigenous nationalities consisting of more than 600,000 people. To secure these land and resource rights, the organization also plans to attract global funding and interest in the initiative.

The restoration of more than 8.7 million hectares (21.4 million acres) of forest needed to protect endangered species and maintain the connectivity of the Andean-Amazonian ecosystem will also contribute to the overall goals.

The Sacred Headwaters region contains the most biologically diverse ecosystem on the planet and plays a critical role in generating rainfall and maintaining the hydrological cycle for the Americas.

Several critically endangered species can be found in the region, including the Rio Mayo titi (Callicebus oenanthe) and the Ecuadoran white-fronted capuchin (Cebus aequatorialis), both monkeys found nowhere else on Earth.

The bioregional plan is not limited to the forest protection but also proposes a potential transition from the current extractive economic model based on oil exploitation, logging, and mining, to an ecological one centered on sustainable entrepreneurship, community tourism, and Indigenous concepts of well-being (Buen Vivir).

The alliance aims to achieve this by forming agreements between states, companies, and Indigenous and civil society organizations to ensure that no activity relating to the extractive industries occurs in the area.

The plan’s success, however, is dependent on support from the Ecuadoran and Peruvian governments.

“We want a collaborative relationship with the government,” Uyunkar Domingo Peas Nampichkai, coordinator of the Amazon Scared Headwaters initiative, told Mongabay in an email. “But, one with autonomy.”

When presented with the bioregional plan in August and October, representatives of both governments expressed support for the initiative and promised to highlight the plan at the international level.

Peru’s economy and finance minister, Pedro Francke, told the alliance that he was committed to assist in searching for funding.

“I think it is very significant that we are returning to the idea of Buen Vivir [and] of the autonomy of Indigenous Peoples,” Francke said. “The Ministry of Economy and Finance can support and look for the means [and] processes.”

Ecuador’s minister of environment, water, and ecological transition, Gustavo Manrique, said “the initiative will be the focal point” of his ministry’s work when presented with details of the Sacred Headwaters plan.

Despite the Ecuadoran and Peruvian government officials’ positive responses to the initiative at COP26, they have told the alliance that the issue of repaying foreign debt poses a challenge.

Currently, both countries rely heavily on revenues from their respective extractive industries, which also operate within the Amazon, to help pay off their debts.

“[Government representatives] have publicly stated that they are going to work hand in hand with Indigenous communities. So, the answer has been positive,” Nampichkai said. “But international debt is an issue — it’s pure destruction. They are trapped in that way.”

In Ecuador, oil extraction is one of the country’s main sources of revenue for foreign debt repayments.

According to a report by the World Bank, as of 2020 Ecuador’s foreign debt stands at $58.5 billion, or more than half the size of its economy.

Oil activity in both Ecuador and Peru began decades ago, causing a series of environmental damages and impacts on IPLC territories.

U.S. oil giant Chevron and its subsidiary, Texaco, are associated with the biggest oil spill in Ecuador’s history.

Dubbed the “Amazon’s Chernobyl,” more than 16 billion gallons (73 billion liters) of toxic waste was discharged and some 1,000 toxic waste pits abandoned, with evidence of high pollution levels in soils and water in the Ecuadoran Amazon.

According to health evaluations, IPLC individuals have died of cancer and oil-related diseases in the affected areas.

Most of the region’s oil fields are located in the northeastern part of the Sacred Headwaters, with pipelines located within the Siona, Cuyabeno-Imuya and Kichwa communities. These areas have been cleared to facilitate development.

However, in Peru, oil production has been declining since 2007, with occasional spills associated with the Northern Peruvian Amazon pipeline.

One of the country’s main sources of revenue to repay $37.6 billion of foreign debt is mining, including for copper and gold.

The alliance of Indigenous organizations said a potential solution to the challenge of protecting 80% of both nations’ Amazon rainforest is in the form of debt relief by international financial institutions and industrialized nations.

This aims to make space for conservation efforts in the region. To address climate change, the Indigenous leaders said, it’s imperative that stakeholders around the world work together in a synchronized manner.

“If we don’t have global unity we will fail,” Nampichkai said. “We all win or lose.”

According to the bioregional plan, the transition will not lead to a major loss in revenue for either countries.

A report by the High Ambition Coalition (HAC) says that if the 30 by 30 initiative is implemented, the economic outputs of ecotourism would be greater than if it wasn’t. This is based on a broad-sense economic analysis focusing on forests and mangroves.

“For those biomes alone, the 30% target had an avoided-loss value of $170-$534 billion per year by 2050,” the report says, “largely reflecting the benefit of avoiding the flooding, climate change, soil loss and coastal storm-surge damage that occur when natural vegetation is removed.”

However, funding is still an issue. Indigenous leaders are now planning on completing a regional ecological economic plan, developing conservation funding solutions, and forming a strong regional alliance of key stakeholders to ensure the success of the Sacred Headwaters initiative.

“We want this to be a model at the international level,” Nampichkai said. “Start in Ecuador and Peru, and then replicate it internationally. If the funds do arrive, we want to take action. With our plan we already have the road map.”

This article was originally published by Mongabay on December 3rd, 2021 — and was made available to Good Good Good.