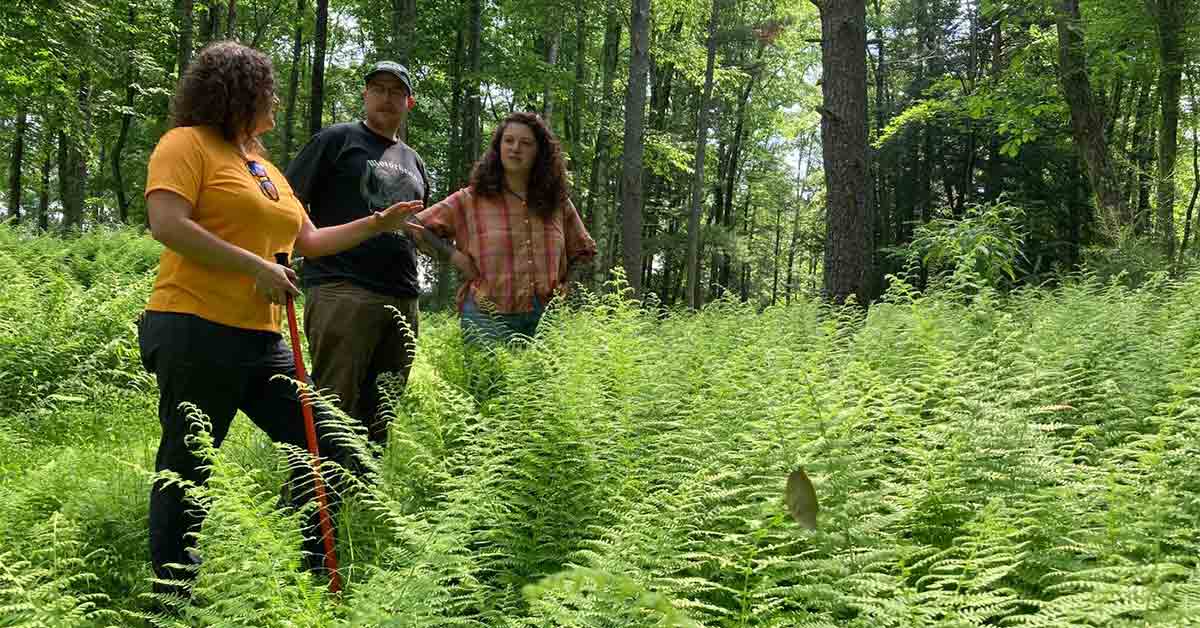 — 39% of U.S. forest land is privately or family owned

For Sara Velazquez and her husband, purchasing the 55 acres behind their rural Pennsylvania home was the start of a lengthy effort to preserve and resuscitate the hilly forestland.

The question was how to pay for that work.

“A nice, healthy oak forest – that’s what I want,” Velazquez, 28, told the Thomson Reuters Foundation in June, sweeping her arm across the property’s shadowed valleys and mixed tree stands.

“We have a lot of invasive species in here, so dealing with that is part of our plan over time,” said her husband, Dan Nelson, 37.

Just after they purchased the land in 2019, however, the pandemic forced them both out of work, raising concerns about how to pay the annual taxes on the land.

One option could be logging, a common priority in the region, Nelson said.

“It’s sort of the culture here. When we bought the property, everyone was like, 'Are you going to log it?'” he said, noting that many see timber as “free money up in the woods".

Now they think they have found a different solution.

In December, the couple signed a 20-year contract with the nonprofit American Forest Foundation’s Family Forest Carbon Program, which aims to help small-scale landowners with as little as 30 acres do something new: access fast-growing “carbon markets”.

The trees on Velazquez and Nelson’s properties will now absorb and store a measured amount of carbon for at least the next two decades.

Credits for that effective reduction in climate-changing emissions will in turn be sold to help corporations such as outdoor outfitter REI move toward their “net zero” emissions goals.

To achieve the goals, companies are supposed to reduce their own emissions to nearly zero but can buy emissions reductions elsewhere - known as "offsets" - to cover any remaining hard-to-cut pollution.

Velazquez and Nelson, in turn, receive cash that helps them cover their tax payments, plan for revitalizing the forest and, for now, stay away from logging.

In the United States, the largest portion of forest land – 39% – is family owned, according to the American Forest Foundation, in addition to that owned by the government, timber companies and other entities.

As such there has long been promise in connecting small-scale landowners with carbon markets, said David N. Wear, a senior fellow with the Washington-based Resources for the Future think tank.

But there has also been a question of how to do so, given upfront costs of up to $200,000 for project development, monitoring and more, as well as the 100-year contracts typically involved.

“Now we’re at a juncture,” Wear said of new efforts bridging this gap.

“This is the emergence of something like agricultural coops: You don’t have the ability to market directly to your purchaser as an individual, but you can come together and engage the marketplace as an aggregate.”

Such efforts are now set for a major boost under climate legislation passed this week by the U.S. Senate, which would provide $450 million to push private landowners toward forest management practices with climate benefits, according to the nonprofit American Forests.

The bill includes a particular focus on underserved communities and family forest owners, and would likely bolster programs such as the Family Forest Carbon Program.

If passed by the U.S. House of Representatives, the legislation would “unlock the power in family-owned forests to tackle climate change,” American Forest Foundation President Rita Hite said in a statement.

For small landowners, these new programs seek to help tip the scales on the value of forests, making standing trees more valuable than harvested timber, and in turn guiding new management practices.

“The majority of landowners don’t actually say their number-one interest is in timber but the majority do end up timbering their land,” said Sarah Hall-Bagdonas, senior forestry manager for the Family Forest Carbon Program, which launched in 2020 and also helps landowners come up with a sustainable forest management plan.

“So the voluntary carbon market really provides them with another option besides the timber market.”

The voluntary carbon market more than doubled from 2020 to 2021 to more than $1 billion, according to the Ecosystem Marketplace research group.

That growth might make it seem “as if there’s conflict between managing for carbon and managing for timber”, as landowners increasingly opt for carbon, said Nathan Truitt, a senior vice president with the American Forest Foundation.

But the two are not exclusive, he said.

“Rather than thinking about harvest versus not harvest, good projects will think about how you adjust harvesting so you maximize productivity of the land … to create more carbon and more timber.”

As yet, the financial incentive for storing carbon is not enough to prompt harvest reductions, said Jim Hourdequin, CEO and managing director of the Lyme Timber Company, which manages about 1.5 million acres of forest.

For that to begin to happen, "the price needs to be a lot more than the current price of carbon," he said – around $30 to $60 per ton, or two to three times today’s price.

'All of The Landowners'

At the other end of Pennsylvania from Wayne County, Raul Chiesa and Janet Sredy own and manage Beckets Run Woodlands – 110 acres that has been in Sredy’s family but long saw poor agricultural and management practices, she said.

Since 2007, the couple has been working to resuscitate the land's forests, manage for wildlife and safeguard rare plant species such as snow trillium, which blooms when snow still covers the ground.

The work costs around $10,000 a year, defrayed through grants, timber harvesting, hunting leases and other earners - now including carbon sequestration.

Chiesa and Sredy are working with a company called NCX, which uses satellite imagery and artificial intelligence to gauge carbon-storage potential on small land holdings. It then sells carbon credits, with the income going to help landowners defer logging for a year at a time.

Since last year, the company has enrolled nearly 2,500 U.S. landowners who hold over 4 million acres, with a median size of around 200 to 400 acres per landowner, it said.

“If our societal goal is to mitigate climate change and enable climate storage on land rather than in the atmosphere … we’ll need to enable all of the landowners to participate in the carbon market,” said Jennifer Jenkins, chief sustainability officer at NCX.

"It's too late if we wait 99 years," said Jenkins, who noted NCX hopes to extend its year-long contracts to two to five years.

Chiesa and Sredy, who started thinking about carbon sequestration a decade ago, signed with NCX in January, and in December they should receive a little over $1,400.

They can then re-enroll, though first the pair plan to compare timber and carbon prices.

For now, the process has deepened their appreciation of the property’s trees – and Chiesa said carbon credits feel like a real opportunity.

“This is the business of conservation that is being sustained, supported by a different type of economy … other than conventional forest products. This is something that’s absolutely new," he said. 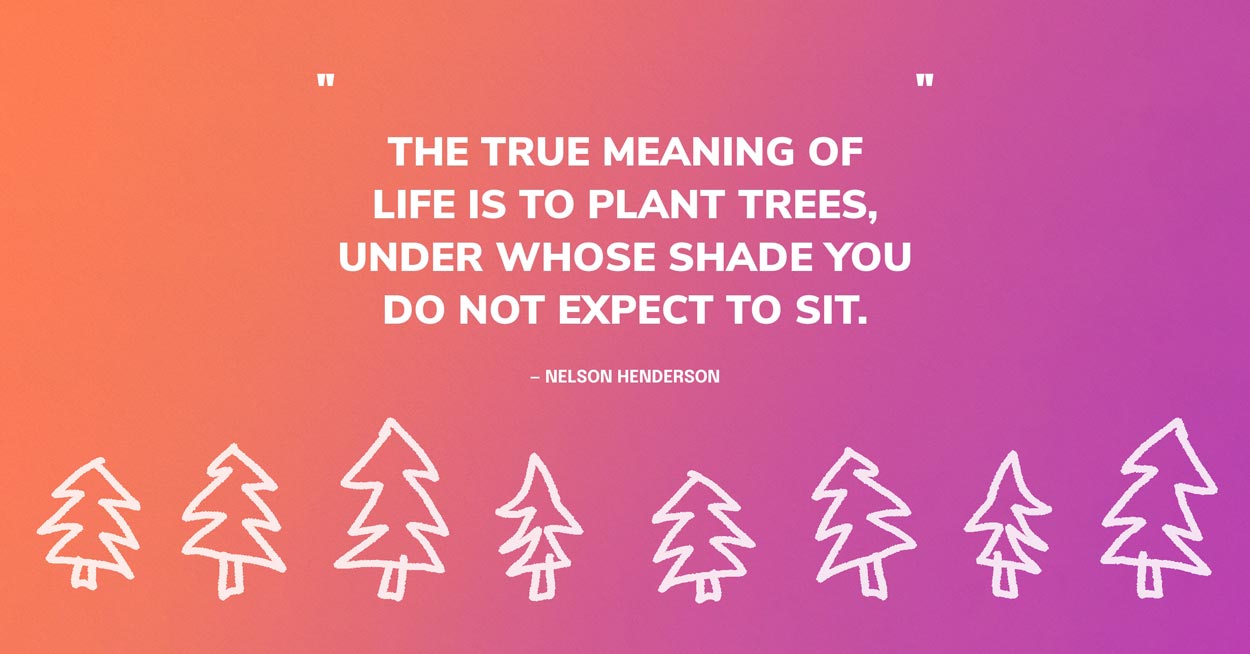 The 77 Absolute Best Quotes About Trees

This week we've compiled the most meaningful quotes about trees, forests, and environmentalism from folks who care greatly about protecting the Earth. Their words are powerful reminders of our responsibility to our planet.