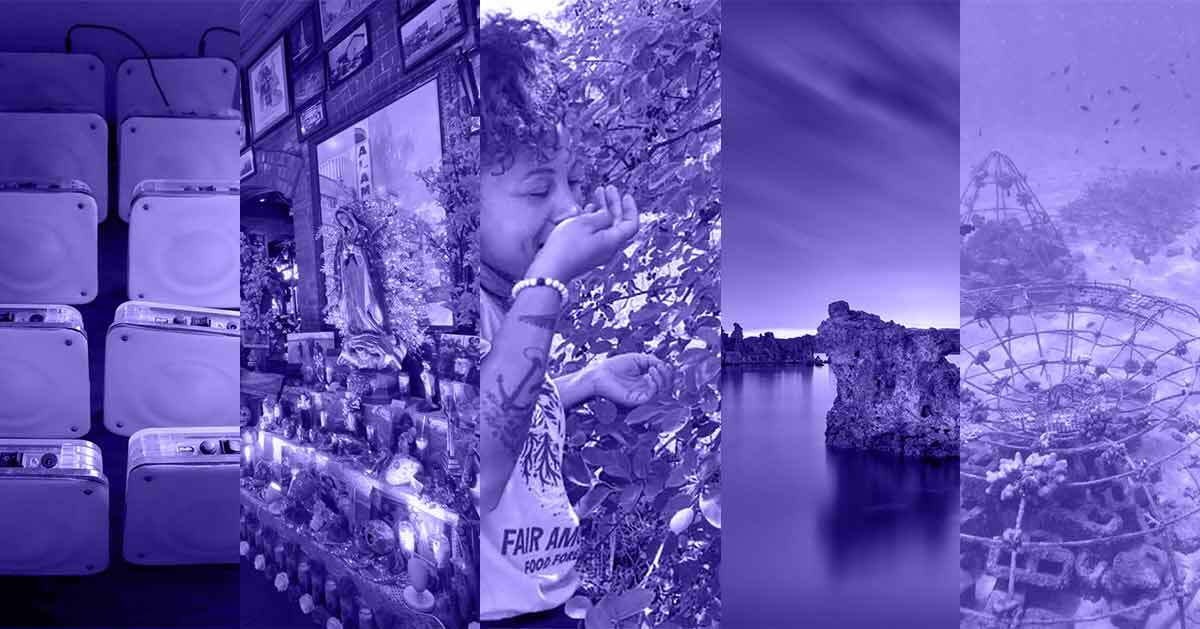 After seeing a need for locally made, affordable electronics using parts not easily accessible in the country, Nigeria-based Quadloop’s founder Dozie Igweilo found a way to turn would-be e-waste into solar lanterns.

Not only does Igweilo’s solution help reduce the amount of electronic waste in the country, but it also meets another significant need: light during the country’s regular power outages. It’s also helping alleviate some of the financial burden of purchasing fuel for electricity.

👻 Here’s a spooky statistic: the amount of plastic waste in costumes thrown away in a year is equivalent to discarding 83 million plastic bottles. 👻

In light of that and some other truly terrifying data surrounding the waste associated with Halloween and costumes, in particular, there’s a bit of encouraging news for those of us who want to see more costumes “made” out of what we already have or using thrifted pieces: secondhand clothing sales are booming.

While fast fashion is expected to grow 20% in the next 10 years, secondhand fashion is poised to grow 185% — and the secondhand clothing trend has the potential to reshape the fashion industry and mitigate the industry’s detrimental environmental impact on the planet.

Thanks to growing consumer demand and new digital platforms like Tradesy and Poshmark that facilitate the peer-to-peer exchange of everyday clothing, the digital resale market is quickly becoming the next big thing in the fashion industry.

Today is Día de los Muertos, and a restaurant in San Antonio is honoring the holiday with a special tribute to the 53 migrants that were found dead in a tractor-trailer earlier this year.

Mi Tierra set up and displayed an altar for residents, customers, and guests to pay tribute to the Mexican, Honduran, and Guatemalan migrants who lost their lives.

“We highlight, celebrate, and prayerfully embrace the families of every man, woman, and child who lost their lives as they journeyed towards a life of opportunity and justice in the United States. Our hearts are forever marked by the knowledge of their strength, courage, and faith to wander out into the many unknowns, above all consequence, on their quest for the American Dream,” Deborah Cortez, the altar’s creator told a local news station.

In Philadelphia, roughly one in six households are food insecure — higher than the national average of 12 percent. And while many are familiar with growing vegetables in backyards, rooftops, and urban farms, there’s another approach gaining popularity among policymakers, nonprofits, and residents: planting food-bearing trees.

With fruit trees in almost every neighborhood, Philadelphia provides a roadmap for others to follow. A residential tree-giveaway program, a community-informed strategic plan for tree cover, and collaboration with the nonprofit Philadelphia Orchard Project (POP) are just a few ways the city is working to bring food-bearing trees to neighborhoods most in need.

In addition, residents, joined by community gardens, schools, and hospitals, are driving the trend.

In 1994, under court orders, California finalized its plans to repair the 780-square mile Mono Lake following extensive damage from a human-caused drought. Without these plans and protects, experts say the ecosystem would have collapsed completely in the early 2000s.

Among other things, the city cut water diversions from the lake by 80% to give the lake and streams time to heal. Now, water levels have increased, migratory birds have resumed their regular stop at the lake, and key tributaries have been restored.

The lake’s recovery serves as a prime example of what happens to vulnerable ecosystems when we protect and work to restore them — and should other efforts to heal degraded and warming ecosystems.

In nature, coral grows at a creeping half-centimeter per year through the accretion of minerals dissolved in seawater, which form a thick layer of substrate. But on electrically charged reefs, the electric current takes on some of the heavy lifting and allows the reefs to grow seven to twelve times faster.

Hastening coral growth is not the only benefit of a small shot of electric current. The buzz ensures a continuous deposit of calcium carbonate, which makes these reefs self-repairing. They are also more resilient to tsunamis, cyclones, and storms.

After witnessing his friends start getting their periods and, with no access to free period products at school, had to go home, a sixth grader in North Carolina decided he wanted to help.

To Jayden Hooker, periods are a natural part of life and shouldn’t be taboo. His mother helped him learn more, especially about the issue of period poverty, which nearly a quarter of all students experience. And 84% of students have missed class themselves or know someone who has due to a lack of access to period products.

Now, Jayden spends his time raising money and collecting donations for period product dispensers at his school. Parents, PTO members, and others have donated enough products for 2-3 dispensers to be installed and stocked for the school year.

Bumble made its cyberflashing detection software available as open-source code for the wider tech community to use. Bumble’s “Private Detector” tool alerts users when they've been sent an obscene photo and automatically blurs the image.

India announced men and women cricketers will receive equal pay. The Board of Control for Cricket in India announced the pay equity policy as a “first step towards tackling discrimination.”

A cafe in Tuscon, Arizona is also an employment training program for people with mental illnesses. Café 54’s motto is “Fresh Food, Fresh Start” and helps employees gain new skills and land a permanent job in the workforce when they’re ready.

After a year of being “closed” due to high demand, John and Hank Green’s Awesome Socks Club is back open for sign-ups. Subscribers get a monthly pair of socks that give back — 100% of profits go to support maternal health in Sierra Leone.

Harry Styles helped register over 54,000 new voters ahead of the midterm elections. Styles offered fans who registered to vote a chance to win travel and tickets to his annual “Harryween” show, and set a new single-day record for HeadCount.

The Miss Universe Pageant is now owned by a transgender media tycoon. Anne Jakkaphong Jakrajutatip, one of the richest transgender women in the world, wants “to evolve the brand for the next generation.”

For the first time in history, New Zealand’s Parliament has an equal number of women as men. The country has long been a leader in women’s political representation, becoming the first country to give women the right to vote in 1893.

Akron just became the eleventh city in Ohio to ban conversion therapy for children. The new ordinance is effective immediately and comes two weeks after a similar ban in Cleveland.

Environmentalists are celebrating Lula da Silva’s election as the next president of Brazil. He has already promised to fight record-high deforestation that occurred under the previous president, and send representatives to the UN’s climate conference.

In New Zealand, wages for some of the lowest-paid jobs have risen almost twice as fast as the national average. The average pay for wait staff, baristas, and bar staff has risen by more than 12%.

The first openly trans and non-binary artists earned the number-one spot on the Billboard Hot 100 chart. Sam Smith and Kim Petras’ song “Unholy” was number one in the week ending on October 20.

After a two year conflict between north Tigray and federal forces, both parties agreed to end the civil war in Ethiopia. Millions have been displaced by the conflict, and the prime minister said the agreement was a “monumental” breakthrough.

Julia Roberts confirmed that Martin Luther King Jr. and Coretta Scott King paid the hospital bill for her birth. The actress said their families first met when the Kings asked her mother, who ran a theater school, if their kids could enroll since they couldn't find a place that would accept them. (P.S. Read our favorite Coretta Scott King quotes.)