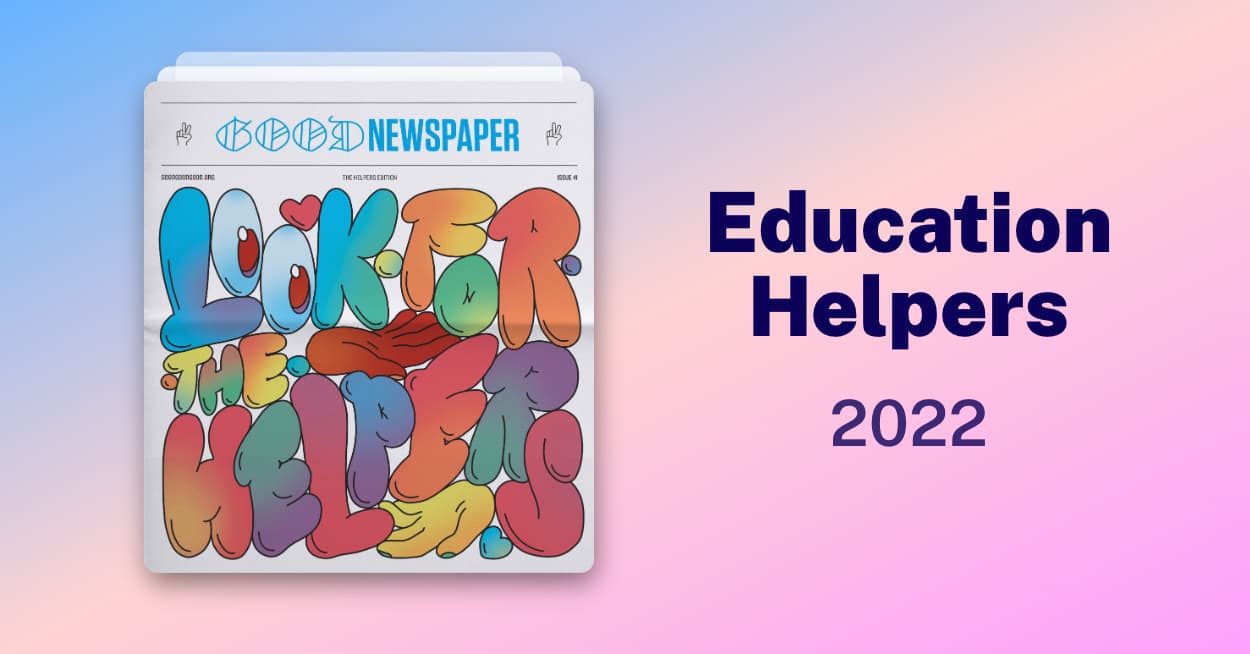 In this post, we’re highlighting Education Helpers and simple ways to make a difference:

Quinta Brunson is a writer, producer, actress, and comedian. You might recognize her from the breakout ABC comedy “Abbott Elementary,” in which she’s the creator, executive producer, writer, and star.

The series — inspired by her mother’s teaching career at an under-resourced elementary school — earned three Emmy nominations making her: the first Black woman in TV history nominated in three comedy categories in the same year, the youngest Black woman ever nominated in the comedy acting category, and the second Black woman to win the Outstanding Writing for a Comedy Series category.

Brunson most recently used her platform at the annual TIME 100 Most Influential People of 2022 gala to call out politicians and advocate for higher teacher salaries.

“I play a teacher on TV, but every day I wonder if I’d be strong enough to be the one in real life,” Brunson said in her toast.

She’s since dedicated a portion of the show's marketing budget to helping underfunded teachers.

Carey Arensberg (@mrsarensberg4th on TikTok) is a fifth-grade teacher from Mobile, Alabama.

She’s known around her community and online for her “Care Closet,” a resource available to students who are in need of essential items like dinner boxes, hygienic products, and extra uniforms — even if it’s for another sibling or family member.

“It has helped build such a strong sense of trust and community,” Arensberg shared on TikTok. “Students are able to have their physiological needs met, which allows them to relax and focus on their schoolwork instead of what they may be lacking.”

Her sweet, compassionate videos have inspired so many others to start and maintain their own classroom Care Closets. Arensberg — a certified trauma and resilience practitioner — also focuses on providing her over 400,000 followers with social-emotional learning and trauma-informed practices.

Sharon McMahon (also known as @sharonsaysso), is a former high school government and law teacher who rose to prominence in 2020. Her community, the “Governerds,” has raised funds for teachers, neighbors, and organizations, as well as built a coalition of individuals who value McMahon’s dedication to sharing non-partisan facts about the U.S. government and democracy.

While McMahon had previously created a successful teacher grant program that raised more than $560,000 — she later set a more ambitious goal for her July 2022 campaign: $1 million.

Within just one weekend, the Governerd community raised $1.1 million — and continued to raise more funds over the next week.

The funds went directly to teachers from every corner of the U.S. in the form of over 2,000 grants, each worth $500, with no stipulations on how the funds were used.

McMahon and her community teach us that we have more in common than we think — that generosity, kindness, compassion, and optimism can be the way forward.

3 Ways To Support Your Local Schools: