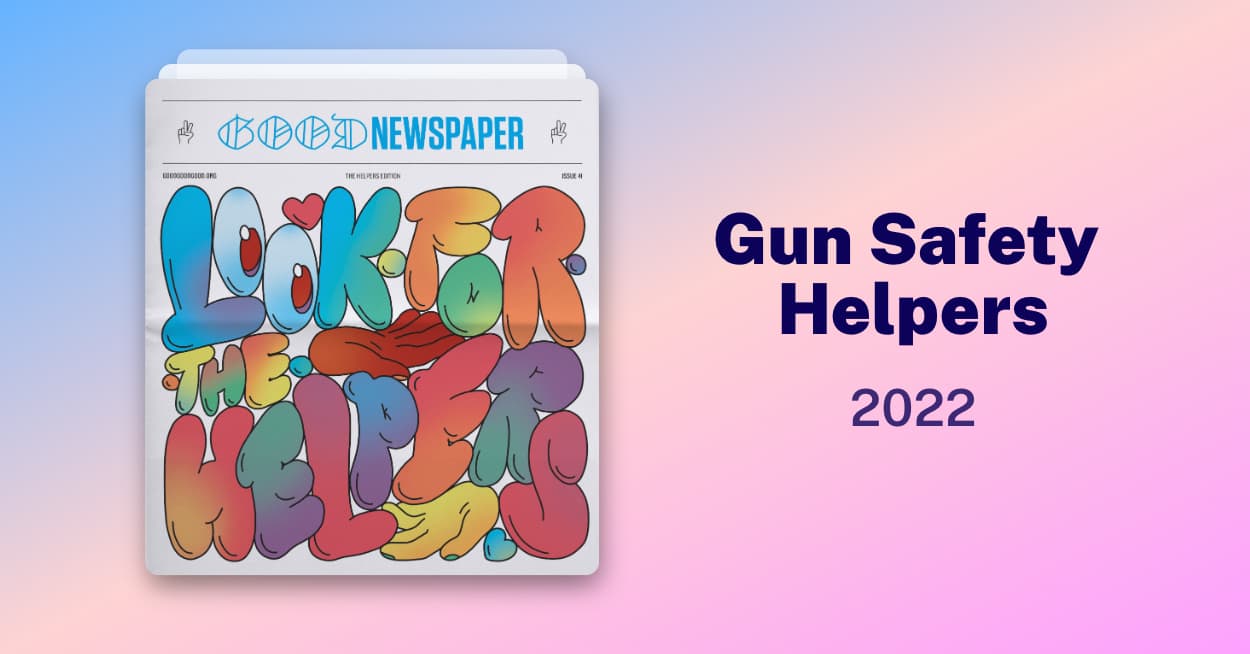 In this post, we’re highlighting Gun Control Helpers and simple ways to make a difference:

In 2018, Manuel and Patricia Oliver lost their son, Joaquin, in the mass shooting at Marjory Stoneman Douglas High School in Parkland, Florida.

In their healing process, the couple started a nonprofit called Change the Ref (CTR), with the mission of increasing awareness of mass shootings and reducing the public influence of America’s largest gun lobby group, the National Rifle Association (NRA).

Over the years, CTR has worked to empower young leaders by using urban art and nonviolent creative confrontation to expose the effects of mass shootings in America, and demand stricter gun laws.

The latest initiative from CTR is The Yellow Bus Project — a mobile museum made of 52 empty school buses honoring the 4,368 children whose lives have been lost to gun violence since 2020.

While it’s heartbreaking that any demonstrations like this must occur, what the Oliver family is doing is a courageous and creative act of resistance that should be celebrated — literally demonstrating that folks are willing to mobilize towards change.

Read about how to stop school shootings

After 10 people were killed in a mass shooting at a Buffalo, NYN.Y., supermarket by a white supremacist gunman, Buffalo public school associate superintendent Fatima Morrell, Ph.D. helped her students process by expanding the curriculum around racism.

This included principles such as empathy, diversity, and restorative justice.

“For all our children, we have to unpack white supremacy, as hard as that is to talk about,” Morrell shared with TIME.

“It is important that every single child receives an anti-racist curriculum in the Buffalo public schools, and I’m going to continue to push that.”

Her goal is to engage and empower students by providing lessons about the historical contributions of Black, Latino, and Indigenous communities.

Morrellbegan implementing anti-racism education during the aftermath of the George Floyd murder. She led the charge in training parents, community members, and more than 3,500 teachers on the goals, strategies, and best practices for teaching and supporting students from diverse backgrounds.

She is nationally recognized for her antiracism work.

When word spread throughout the small Uvalde, Texas community that an active shooter was at Robb Elementary School, Angeli Rose Gomez was one of many concerned parents who rushed to the scene.

The mother of two said that while she could hear gunshots, she witnessed minimal law enforcement effort to serve and protect their children.

Her overwhelming frustration briefly landed her in handcuffs. When she was released, Gomez managed to hop over a nearby fence and into the school.

Within minutes, she was able to usher her oldest son and his classmates over to safety, running back inside a second time to do the same for her youngest son and classmates.

While the lack of swift, coordinated communication (not to mention the lack of sensible gun laws in Texas) led to the horrific tragedy that resulted in the loss of 19 elementary students and two teachers there was one determined mother who put her life at risk — twice — to make sure her kids, and their classmates quickly made it to safety.